It was not until Daniel James appeared at the Old Bailey on 19 February 2008 that the Prosecution reluctantly disclosed more evidence. The Prosecution had been holding on to this undisclosed evidence for more than a year, and had taken the position that it would not help the Defence case. I respectfully disagree.

Now Daniel faces his trial in the Old Bailey on 2 October, and they have brought in a Welsh judge Sir David Roderick Evans to preside over the case, presumably because a provincial judge is more pliable and will bend to the Prosecution’s way of thinking. Mr Justice Roderick Evans’ main claims to fame seem to be his campaign for a prison in North Wales and that Welsh should be spoken in the Welsh Courts.

Mr Justice David Roderick Evans
Last June I advised Daniel that he should demand that he goes before a Court Martial, but his request has been denied by the Attorney general, who thinks he should be treated as a civilian. No wonder the Crown Prosecution Service want control of this case because they know they can engineer an unfair trial for Daniel, as they did in my own case. The last thing the CPS wants is for Daniel to be tried by the Army, because he will get a fair trial before his peers, and the following statements show that Army people will come out in Daniel’s favour.

These are 2 of the previously undisclosed statements:

I am presently in Afghanistan on Operation Herrick as Staff Officer Grade One Interpreters.

I assessed Cpl James as the best possible person to do that job based on his competency and linguistic experience. As a soldier I found him very easy to get on with. He was well turned out and quite deferential to rank. I would see him about once or twice a month when I visited Kabul. He did ask about promotion and I believe he should have been given acting rank to Sergeant because of his linguistic skills and he was qualified due to military courses held.

In my dealing with Corporal James he never once mentioned to me his religion, or any issues around bullying. He did however have an issue about not being promoted and this seemed to frustrate him - he seemed to feel that he had been passed over. I explained to him the problems within the Territorial Army (TA). I tried to address this situation. I spoke to the AGC SPS Major attached to the ARRC who dealt with soldiers’ career management. I took this action because I felt he was qualified and competent enough to be promoted and in his position as the General’s interpreter I felt he deserved the rank of Acting Sergeant. I also assisted Corporal James in applying and completing his application for language exams, which would allow him to obtain a pay rise, which I felt he deserved.

When I visited ISAF HQ I came into contact with Corporal James approximately twice a month and discussed various issues around work matters and interpreting issues. I felt that Cpl James was well suited for his role and got a great deal of personal satisfaction from his job role. At the time he was the best qualified person in the role and he never discussed with me any of the conversations or translating work he had done with the General. In regard to my comment that I was astounded when I heard that he had been arrested I base this statement on the fact that Cpl James always came across as an extremely professional soldier.

I am currently posted to the Allied Rapid Reaction Corps Support Battalion. I arrived at ISAF HQ in Kabul as Officer Commanding 14th Transport Squadron. As Deputy Commander of HQ Support Group I have additional responsibility for oversight of morale, welfare and activities on camp.

I came to know Cpl James directly in two distinct roles: firstly as a result of his involvement with ‘salsa’ classes on the camp and more importantly through using him on a number of occasions as an interpreter in relation to a school’s project that the Battalion had come to sponsor. He assisted me in all resultant dealings with the Headmaster, local elders, and miscellaneous local contractors/suppliers. It is my belief that Cpl James accompanied me on visits to the school on at least 4 occasions. On 18th 2006 after local contractors had first levelled the site, arrangements were made for a detachment of military personnel from ISAF to attend and erect between 18 and 20 heavy-duty tents purchased with money raised on the camp.

I recall him intervening on my behest at one point. It had not been possible to erect a number of the tents as intended because the ground had not been cleared for levelling by the contractors. We were worried that if left on site, these extra tents might possibly be stolen or sold because of the impoverished state that the local people found themselves living in. Cpl James stepped forward and spoke on my behalf to make the point that the people must ensure that this did not happen. I think he told them that we would be back to check up on them. Everyone was happy and I was personally very impressed by the manner in which he conducted himself.

On 19th October 2006 we returned to the site. The school was now open as a result of our efforts the previous day and the tents that we had been unable to erect were still intact. A large group of local people had gathered to inspect what had been done for them. Everyone was very excited. Cpl James himself was effusive he told me that the people were thanking him over and over again saying people have promised and promised in the past but you have delivered. A t one point as we were still at the school site, I remember looking to one side and seeing Cpl James in the process of handing a bundle of cash (possibly US dollars) to a local female. I immediately called out to him and said “Corporal James, what are you doing?” He replied “Sir, it’s only 65 dollars, she has 6 children” and then went on to add “it’s salsa fund, Sir” before finishing by saying “I help, I help where I can”.

The female in question was overwhelmed by such generosity and grabbed Cpl James by the hand. She then spoke to him evidently to express her gratitude. It was clearly a very emotional experience for both of them. I feel that it is safe to say that staff, pupils, parents and everyone else involved with the Saddudin Ansari School were totally overwhelmed. Local media coverage was also present and this served to project a very positive image of ISAF which no doubt contributed to overall efforts to win over the “hearts and minds” of the Afghan people as a whole. From what I had seen of him in action at the school, I would say however that the way he interacted with those we met was without exception excellent. He was animated, succeeded in winning the trust of the people, had them all smiling and was clearly passionate about what we were doing. He was in my view perfect for the role that I needed him for.

In my experience, Corporal James was always very positive about the role of ISAF and the assistance that was being rendered to the Afghan people. At no time did we discuss the current situation in Iraq or political opinions in general.

More details of this school project are available in the ARRC Journal of Spring 2007 at page 34 of the pdf document.

So why am I putting this information on my blog, and why is it relevant to me and anyone else facing a serious trial in the UK?

The statements above are a good example of the way that Crown Prosecutors can improve their chances of securing a conviction. They protect the Prosecution case by not disclosing anything which could help the Defence, and it is quite clear on reading the above statements that they do in fact help Daniel James, and go a long way towards showing the sort of person he really is.

British Justice is not open and fair, rather it is a secret operation where biased people can concoct their case from all the evidence available, and then decide what crumbs they will throw to the Defence. The Prosecution in my own case hid vital evidence from my Defence, and in so doing were able to secure a conviction based on lies.

The tragedy is that the British Public appears to believe that our Justice System is fair, and that it convicts only the guilty. The truth is that the jury has no idea what goes outside a courtroom, because Justice in Britain is administered by barristers, Police and judges who are both dishonest and corrupt.

NB My previous posts on the subject of Daniel James can be found below:

Daniel James wants to go before a Court Martial

Daniel James spy trial is due to start tomorrow

Following publication of this post I received a letter from Daniel James’ solicitors:

I write in relation to the above named and further to the letter written by Danny, which was sent out to you from our office, during the week beginning 13th July 2008.

As you know the letter contained extracts from two statements which form part of the unused material in this case.

I also note that these extracts have appeared on your "parellic blogspot" as well as other websites. I appreciate that printing these extracts was done in an effort to highlight your view of the unfair tactics that the Prosecution employ when dealing with high-profile OSA cases like yours and Danny's.

However, it is important that you know that the disclosure of unused material is a criminal offence/contempt of Court, under the CPIA. This means that by publishing/disclosing this material you could be found guilty of a criminal offence, as could Danny. I am simply writing this so that you are aware of the situation.

I have discussed this issue at length with Danny and we have agreed that it is important that you were aware of the potential implications of disclosing this document both to yourself and him. Whether you remove it from your blog and any other sites is a matter for you, although my advice would be that you should.

Notwithstanding the above, Danny wanted me to reiterate that he appreciates the advice and support that he has received from you regarding this case. 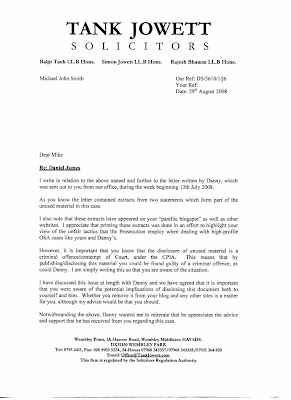 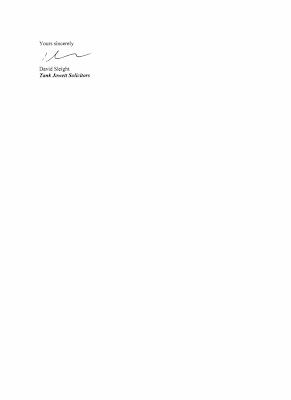