When people tell us surprising things we do not always take on board that they are true. So, when my friend John Symonds told me that the IPCC had been set up to protect the Police from attacks by the public, I was inclined not to believe that the situation was really that bad. But John has seen the Police system from the inside, and he knows better than I do just how corrupt it can get, especially when the Police are desperate not to be exposed for having done something illegal or morally indefensible. What better way to disguise censorship than to dress it up as an “independent” investigation, which can then be used to reject valid complaints with a whole load of lame excuses?

So it came to pass that I took my complaint at the Metropolitan Police Directorate of Professional Standards onto the IPCC, who in turn has rejected it. This is what they had to say:

I am writing about the application made by the MPS to dispense with the complaint you made in April 2008.

As you will be aware from Mark Lawrence’s letter to you dated 12 May 2008, the MPS have applied to dispense with your complaint on 3 separate grounds:

• That your complaint is out of time, namely; more than 12 months have elapsed between the incident, or the latest incident, giving rise to the complaint and the making of the complaint and either that no good reason for the delay has been shown or that injustice would likely be caused by the delay.

• That your complaint is vexatious, oppressive or an abuse of process, because the correct avenue for challenging the findings of a court would be via the CCRC, unsuccessful attempts to resolve these matters through the correct channels has led to the police complaints system being used as another option.

• That it is not reasonably practicable to investigate your complaint as no electronic records of the case exist, nor is it clear at this time whether any papers have been retained.

• The incident giving rise to your complaint was your trial in 1993. Given over 14 years have elapsed since this incident, I consider that injustice would likely be caused by this delay if your complaint were to now be investigated.

• Your complaint relates to evidence that was presented at your trial, and the conduct of the trial itself. In your complaint you stated the CCRC had been investigating your complaints that your trail was unfair, but they have failed to find any new evidence about the anomalies you drew their attention to. I agree with the MPS that the correct process for addressing concerns you have about the evidence produced at your trial would be through the CCRC. The police complaints system was not intended as an alternative means to review decisions made during criminal trials. Opportunities to challenge evidence at the hearing, such as failure to take statements from witnesses, would have been available during the trial, and could have been commented on by the CCRC. In the absence of clear evidence the police perverted the course of justice, and that these matters have already been considered by the appropriate bodies, I consider to address the same issues again via the police complaints system would be an abuse of process. 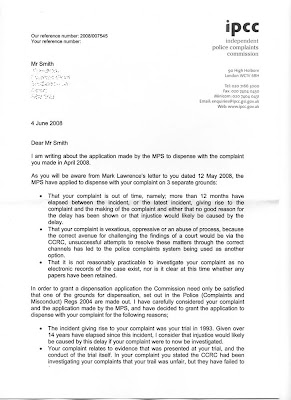 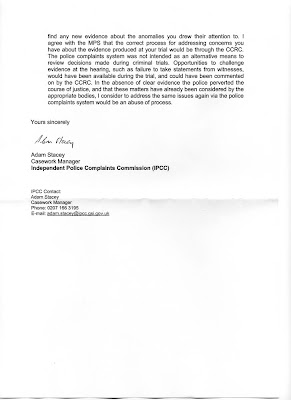 IPCC letter 4 June 2008 page 2
I will not reply to the above letter now, as this matter is likely to end in Judicial Review proceedings, but the IPCC is clearly refusing to accept that there is a matter here that needs to be addressed by the Police. The Police acted improperly, and I believe I have a duty and a right to complain to their Professional bodies in order to obtain a remedy.

However, I now take the view that the Independent Police Complaints Commission is neither independent nor a body interested in thoroughly investigating complaints against the Police. As is evident in some other cases, the actions of the IPCC demonstrate that its main purpose is to protect the Police from those complaints.
Posted by mjs at 7:08 AM 1 comment: