I mentioned earlier in my blog, and the point has also been made elsewhere by others, that there was clearly incorrect information being spread about the case of Daniel James. Daniel’s case was being called the first spy case since the Cold War and even the first such case since that of Michael Bettany in 1984.

There was no good reason why such incorrect details should have been published, and it was especially inexcusable that this story was used in many local and national newspapers, in the UK as well as throughout the world. In an attempt to correct the false information I made a complaint to the Press Complaints Commission about three British newspapers: The Scotsman, Daily Mirror, and Daily Telegraph.

I have just received letters from the Press Complaints Commission giving the details of the satisfactory resolution of my complaints against these three newspapers. Copies of the letters are printed below. 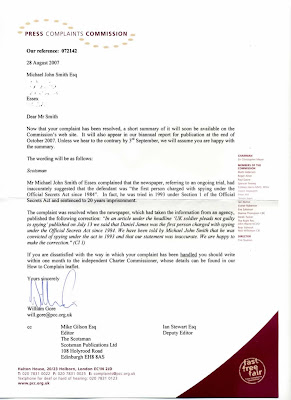 Complaint against The Scotsman 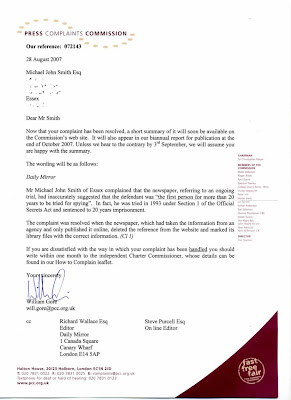 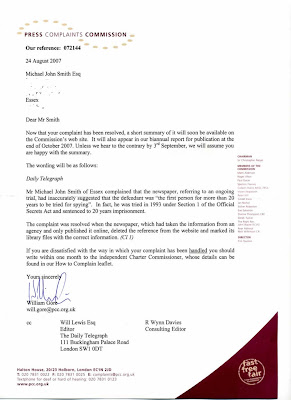 Complaint against Daily Telegraph
It was interesting that all those who published the false story accepted its reliability without question, although there must have been journalists with sufficient experience who were aware that it could not be true. The story appeared to originate from an article by Peter Graff of Reuters (British soldier pleads not guilty to Afghan spying on 13 July), and it is quite worrying that so many journalists will repeat erroneous Reuters reports without checking their accuracy.
I note that Reuters finally corrected their article on 7 August 2007.
Posted by mjs at 8:44 AM No comments: