After making my initial complaints against these 2 solicitors I had to wait some weeks for a considered reply, but the narrow way that the Solicitors Complaints Bureau seemed to interpret professional inadequacy made it difficult to communicate with them, as it appeared that any slight looseness in the words used would be enough for them to dismiss my application without them investigating it at all. It felt a little like those insurance policies, where you only realise later that the small print invalidates any practical issues that might lead to a claim.

The first letter where the Solicitors Complaints Bureau made their points, indicating the way they were thinking, was the following:

Re: Messrs Hallmark Atkinson Wynter
We thank you for your letter of 2nd December 1994. We would comment as follows:-

1) The Bureau is empowered to investigate matters of inadequate professional service. This remit does not extend to considering the advice given, or actions taken by a solicitor (or inaction). Any such defect may give rise to a claim in negligence, which must ultimately be decided by the Courts. For such matters you must take the advice of a solicitor, and if appropriate issue proceedings in the Courts.

2) The Bureau does, as stated, investigate inadequate professional service. This is generally matters such as, delay, failure to respond to correspondence, or failure to follow instructions. When there is a finding of inadequate professional service we have limited powers. We can reduce a bill, and make a compensatory award to a maximum of £1,000.

With respect to the specific issues that you raise we would comment as follows:-

Re: Tuckers
Your allegation that they failed to secure your shares in the electricity company’s, would appear to allege negligence on their behalf. As such, it cannot be considered by the Bureau. The decision to move you to Full Sutton and its repercussions again is of no concern to the Bureau. It is not clear from your letter as to whether or not Tuckers did communicate “the important points....on scientific evidence”, that you refer to, to Mr Summers. You said that Mr Summers said he did not hear “anything significant” from Tuckers. Perhaps Mr Summers did not regard these further points as significant. In any event it does seem that you instructed Messrs Hallmark Atkinson Wynter solicitors before the appeal, and presumably gave these new solicitors details of these points, that you wished to have in the appeal.

Re: Hallmark Atkinson Wynter
We are concerned about the following points in respect of the above firm:-
1) The legal aid application form was apparently not processed by the solicitors.

2) No approach had been made to Mr Michael Mansfield, and you had not been advised of these.

3) Failure to follow your instructions in respect of adding the scientific points to your appeal.

We have accordingly written to the above solicitors asking for an explanation. We will of course write to you further once we have heard from the same. 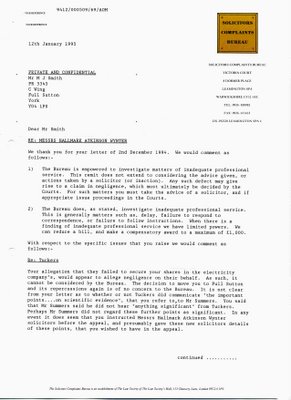 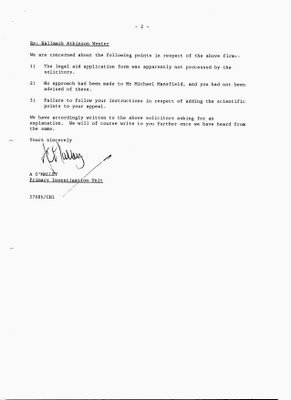 Re: Tuckers / Hallmark Atkinson Wynter
Thank you for your letter of 12th January regarding the above named solicitors. I wish to add a little more in reply.

Re: Tuckers
(1) I accept your decision that the Bureau cannot consider the matter of my electricity shares.

(2) I have maybe been a little unclear on the point about the scientific evidence. I will try to elucidate: -

(a) Tuckers and Mr Gary Summers were both clear that I had serious concerns about the scientific evidence, because I had put my questions in writing to them in December 1993.

(b) Mr Summers had initially dismissed my points (because he had not understood my argument).

(c) I put it to Mr Richard Jefferies on 13th January 1994, that I wanted the scientific evidence investigated for a ground of appeal, and I understood that he would raise this again with Mr Summers.

(d) I did not learn until 1st November that Tuckers had not passed on my instructions about the scientific evidence. From my telephone conversation with Mr Summers on 1st November and my meeting with Mr Summers on 4th November, I learned that only minor matters had been communicated to Mr Summers from Tuckers, but this did not include the matter about the scientific evidence. I am not privy to the communications that were made between Tuckers and Mr Summers and I cannot be categorical about what exactly did pass between them.

(e) The fact that Mr Summers now accepts my argument, and I now have legal aid to investigate scientific evidence, shows that my view was correct in December 1993.

(f) Hallmark Atkinson Wynter took on my case during March 1994. Although they did not resolve the issue regarding the scientific evidence, I don’t believe that this should absolve Tuckers from responsibility. I had been given information by Tuckers that a client should not approach Barristers directly. I’ve never been in such a situation before and so did not know what the correct etiquette was. As both Hallmark and Tuckers had done nothing about the scientific evidence issue, I was in ignorance that Tuckers had not passed on my instructions.

(3) You have not mentioned the other point that I raised with regard to my personal property. Many things were taken from my home and I have no idea what has been returned, or has been kept by the police. I am not saying that there has been any loss (I don’t know), just that Tuckers failed to inform me. Following my conviction, I was not informed where I stood financially, particularly as I had asked to be informed what had happened.

Re: Hallmark Atkinson Wynter
Concerning your item (1). In my communications with the Registrar at the Criminal Appeal Office, in the first week of November 1994,I learned that they had not received a legal aid application from Mr Hallmark and they had me listed as having no solicitor at all. However, as late as 1st November, Mr Hallmark was at Rock Tansey’s Chambers representing me!

I would just like to make a final point that, what I find most inexcusable, is to have to go through a 7 month period with no information from Mr Hallmark of what the real position was regarding my case.

I look forward to hearing from you again, and please do not hesitate to ask for more information.