In 1992 the CIA plotted with MI5 in an attempt to fabricate evidence to frame me. In 1976 I went on a holiday to Canada and the USA and I travelled around by Greyhound bus. What a suspicious thing to do, you must be thinking? Well, in the minds of MI5 this is just the sort of evidence they can twist into proof of guilt.

Below is a copy of the map that was given to me by a friend in Chicago:

A number of locations are circled. At the top is the place where my friend worked, there is also a circle around the Greyhound bus station, and others at the Sears Tower and the Arts Centre. To me this was all innocent, as these were places I visited while I was there, and I went to the top of Sears Tower during my stay. Far from the reality of what I actually did in Chicago, MI5 were desperate to make it appear that I was on a KGB mission, and the CIA were there to help check out the details to try to incriminate me.

MI5 asked Viktor Oshchenko to say something that would help to make the Chicago visit appear to be sinister, and in his meeting with MI5 he did his best: :. ‘[Oshchenko] was shown the marked map of Downtown Chicago and asked for his comments. …. [Smith] was sent on the trip, paid for by the KGB, to establish contacts and friends and to reconnoitre the possibilities of obtaining a job out there. …. [Oshchenko] thought that the ringed buildings and numbers might, therefore, represent universities, research establishments or contact addresses’.

At my friend's recommendation I spent some time on a guided tour organised by the Chicago ArchiCenter. It was very interesting to visit a number of buildings in the city that had played a part in the development of architecture, including examples by the famous architect Frank Lloyd Wright. Below is the front cover of the leaflet describing the guided tours, and I even kept the ticket I bought for that tour. I have never understood the relevance of this for a KGB mission, but that is the sort of lie that MI5 had to use in order to ensure that I would be convicted. 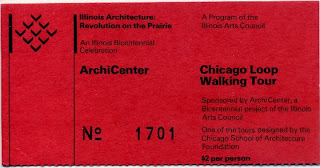