The face of Viktor Oshchenko

Viktor Oshchenko was never properly identified at any time during the legal proceedings involving my arrest and conviction. Mr E (a USA citizen recruited as an agent by Oshchenko) and D.C.S. Malcolm MacLeod (the chief police investigator) identified Oshchenko, on the basis of one 15 year old black and white photograph. Mr E met Oshchenko on about 10 occasions in 1978/9 (i.e. 14 years before he made his identification) and he proved to have an atrocious memory, but he said he recognised Oshchenko from the photograph. MacLeod had never previously met Oshchenko, but on the basis of one meeting could identify him from the photograph by saying that “although he had aged in the intervening years, he still bore a reasonable resemblance to the photograph”. This photograph was never produced in court, but it should have been. 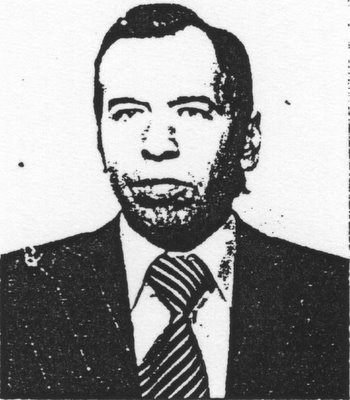 Viktor Oshchenko
The jury recognised the importance of Oshchenko in the trial. They were clearly disturbed that, after mentioning him on many occasions, the Crown presented no evidence to support claims made on his behalf. Nobody from the Prosecution or Defence teams interviewed Victor Oshchenko. There were no official statements from him in court, and no reason given for Oshchenko’s non appearance at my trial. This obviously puzzled the jury, because near the end of the trial they sent 2 notes to the judge:

(i) After the end of the Prosecution case and near the end of the Defence case, on 5 November 1993, they asked: “What evidence is there that Smith was recruited to KGB by Oshchenko?”

(ii) Two hours into their deliberations on 16 November 1993 they asked: “Why is there no explicit statement admissible in court, from Victor accusing Smith of spying for the Russians?”

The jury was obviously concerned that my connection with Oshchenko was not proved. The fact that I was arrested about 10 days after Oshchenko’s defection makes me very suspicious that the circumstances behind my arrest was directly linked to Oshchenko’s defection, but nobody else was arrested. It is odd that, after 7 years spying in the UK in the 1970s, a Russian KGB officer would name only me.

The Crown did not want Oshchenko to come to court. Perhaps it was true that he was working as an MI6 agent for some time before his defection, and possibly he had been recruited by MI5 as early as the 1970s. He was probably one of Britain’s most important spies/double agents and the Security Services did not want it revealed what he had done, or who he had recruited in Britain and elsewhere. The only reason he defected when he did was because the KGB had suspected him of being a double agent. When Oshchenko was recalled to Russia, he knew the game was up and he got out while he still had the chance. So the Crown could not risk bringing Oshchenko to court in case he destroyed their story by revealing too much about his background.

The suspicions about Oshchenko were circulating very soon after my arrest, such as in this newspaper article: “Russia orders big spy recall after defection” (Sunday Times 16 August 1992 Matthew Campbell, Moscow):

In a tactic reminiscent of the cold war, Moscow is to withdraw dozens of its spies from around the world and replace them with new agents following the defection to London of a Russian KGB officer thought to have worked as a double agent for Britain.

Russian intelligence sources said the spies would be called home from Europe and Asia because their cover was no longer secure after the flight of Viktor Oshchenko, a counsellor at the Russian embassy in Paris who holds the rank of colonel in the Russian security ministry.

“Lots of our people have now been taken out of the game,” said a source with the ministry, the successor to the KGB, which was dismantled after the collapse of communism last year.

The sources said Oshchenko, who specialised in science and technology and went missing from the Russian embassy in Paris three weeks ago, was bound to know the identity of a dozen other Russian spies whom he could expose to MI6, the British intelligence service. But more would be recalled as a precaution.

Some of the agents were said to be on holiday in Russia and were being ordered not to return to their posts. Others recalled to Moscow would not be replaced because their jobs were about to be axed as Russian intelligence adapted to post cold war realities. “The emphasis now is on industrial espionage,” said a Russian foreign intelligence source.

Though the emphasis on intelligence gathering may have changed, the traditional adversaries are as active as ever in the post communist era. Russian spies continue to use postings as diplomats and trade representatives as cover for their activities, just as Western agents do in Moscow.

Oshchenko, whose former postings were said to have included a stint at the Russian embassy in London in the mid 1970s, was due to end his tour in Paris, where he had been based since 1985. But the last colleagues saw of him was on July 24, when he told them he was taking his wife and daughter on a weekend trip to the Loire.

Suspicions were aroused in the embassy when an elder daughter called from St Petersburg on July 26 to ask what she should do about a new Volga car Oshchenko had ordered. “Her manner seemed to suggest she knew he would not be returning home,” said one source.

Oshchenko’s failure to turn up for work the following Monday was also considered strange in the disciplined embassy. “Diplomats do not behave like Oshchenko did,” said Yuri Ryzhov, the Russian ambassador to Paris, who suggested that Oshchenko did not want to go home because of Russia’s economic and political problems.

It was not until August 5, when French authorities found Oshchenko’s car at Orly airport, that his colleagues realised what had happened. “It became clear he had been playing a double game,” said Yuri Kobaladze, a foreign intelligence spokesman in Moscow.

Oshchenko’s flight to London was the first such incident in Britain since the defection of Oleg Gordievsky, who was forced to leave Moscow in secret in the back of a van. It followed warnings last week from Leonid Shebarshin, a former KGB chief, that Russian defectors were “traitors” motivated by money who would betray the West as well.

But the fact that Oshchenko has been allowed to remain in Britain indicates he has been of use to British intelligence. This weekend he was said to be in hiding in a “safe house” with his wife and daughter. He will be assisted by his new masters in changing identity.

Worldwide, more than a third of Russian agents are being recalled or relocated.

It is a far cry from the cloak and dagger work of the old days. One of the new tasks of the former KGB agents is to check out foreign companies that want to do business in Russia. In some areas, such as the war on drugs and terrorism, old suspicions have faded to such an extent that Russian and Western intelligence are co operating. But the defection of Oshchenko revives memories of the old era.

I am not happy about the method used to identify Victor Oshchenko in court on 14 October 1993, I think an independent and positive means of identification, such as fingerprints should have been used. The Victor Oshchenko that MI5 talked to could have been an imposter. It does not seem reasonable that a key man in my case, who was responsible for my arrest and conviction, can be identified by the use of one 15 year old black and white photograph, by (a) D.C.I. Malcolm MacLeod, who had never previously met him and (b) Mr E, who had not seen him for 14 years, and was known to have a terrible memory.

Detective Chief Superintendent Malcolm MacLeod said that “On Monday, 22 February 1993 at 2.30 pm I visited a building in Central London which is occupied by the Security Service where I was introduced to a man whom I now know to be Victor Oshchenko. He was the same man as the one in the photograph, which I showed to Michael John Smith at Paddington Green Police Station on Saturday, 8 August 1992.”

Apparently the original photograph was contained in a Security Service file, and had been submitted on 3 February 1978, by the Soviet Ambassador to the Foreign and Commonwealth Office for a certificate of identity for Viktor Alekseevich Ochtchenko, who at that time was a Second Secretary at the USSR Embassy. 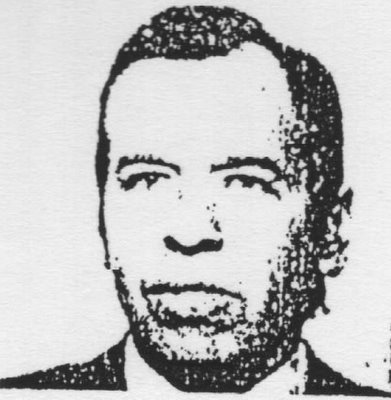 There must be people out there who have a more recent photograph of Viktor Oshchenko - maybe people he met in Paris - and I would be grateful for a copy of any photos that show what he looked like in more recent times. I would expect that the Russian Embassy in London could provide a photograph of Oshchenko, and they would probably be interested in his present whereabouts as I am.
Posted by mjs at 6:11 PM No comments:

After I was arrested on 8 August 1992 I was subjected to 4 days of intensive questioning by the police Special Branch. I denied knowing Oshchenko, and having worked for the KGB. I also denied severing my links with the Communist Party at the behest of anyone, and I denied that my trip to Portugal in 1977 was a KGB training mission.

Throughout the interviews I was not told exactly what I was suspected of having done; nor was I told of the likely charges. It was natural, therefore, that I would be cautious of what I was saying to the police. I knew that I had something to hide, but I was puzzled about what classified information the police were concerned about. However, this reluctance to commit myself whilst in ignorance of the accusations did not help me, as I was then accused of being evasive.

While being interviewed, my home and car were searched. As a result of these searches I was questioned about what was found. The key findings of the search were £2,000 in £50 notes, the “Williams” letter, 4 pieces of paper (referred to as tradecraft notes), and a map of Oporto with crosses on it. 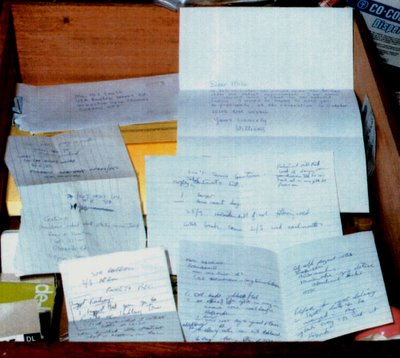 Tradecraft and "Williams" letter found during searches
Also, in the boot of my car, was a holdall containing technical documents and components. A “restricted” document was found amongst the documents in the boot of the car. This was a 1982 document and one of a number left in my desk at work by a predecessor. If the “restricted” document was sensitive, why did Hirst Research Centre not ask for its return when the predecessor retired 6½ years earlier? Also, if I considered that this material was important, why did I leave it in the boot of my car for 7 days, when my car was left in the street outside my house and accessible to anyone? Surely a spy would have hidden the material in a more secure place?

I admitted that I lied on many points in order to protect myself from my relationship with Harry Williams. However, when it became impossible to hide my involvement, I admitted that I had been involved in an industrial espionage operation with Williams.

Half-way through the interviews my speech became noticeably slurred, which led to my lawyers suspecting that I had been slipped drugs in a cup of coffee.

I have added 3 new pictures of the time when I first arrived at Telephone Kiosk 1 on the morning of 8 August 1992. You can find the relevant post here.
Posted by mjs at 4:58 AM No comments: