After waiting 2 weeks for their reply, it was only to be expected that the Bar Council would reject my complaint against Michael Mansfield QC. I have printed the 2 pages of the Bar Council’s letter to me below. 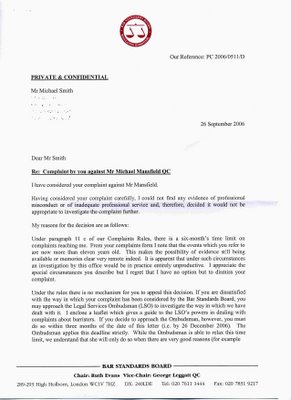 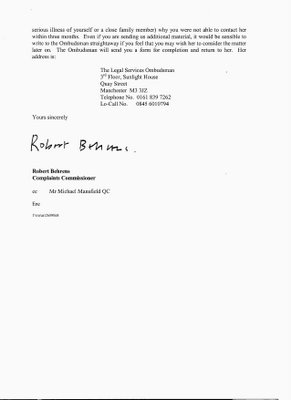 On first reading, the excuses given by Robert Behrens (the Bar Council’s Complaints Commissioner) might appear to the casual reader as reasonable grounds to reject my complaint. However, on closer inspection the letter reveals some quite disgraceful decision making, which demonstrates just how this organisation attempts to cover up for the wrong-doing of barristers, and tries its best to deflect any embarrassing complaints straight into the waste paper bin.

In his first significant point, Mr Behrens claims to have considered my complaint “carefully”, although he “could not find any evidence of professional misconduct or of inadequate professional service”. Well, this point requires further scrutiny, because there is no detail provided by Mr Behrens about the evidence or records he checked before coming to his decision. It is certainly not acceptable, when considering an important complaint such as I have made, for the Complaints Commissioner simply to dismiss my complaint without giving a full justification for what “evidence” he considered - for example, just what did he consider to be inadequate or missing from my case against Michael Mansfield.

I am quite clear in my own mind that the Bar Council did nothing at all to assess my complaint, despite Mr Behrens next paragraph, where he attempts to present his rather feeble reasons for rejecting my complaint. He has now changed his reason to a rejection because my application was out of time - the Complaints Rule paragraph 11c giving him the excuse that I was complaining about events of more than 6 months ago. If my complaint could have simply been rejected on time grounds, then why did he not just end the matter there?

Indeed, it might have been more honest of Mr Behrens to have left the matter there, but he then goes on to raise different issues. He exacerbates his bad decision by arguing that the Bar Council would be unable to investigate my complaint, because it related to events more than eleven years ago, and that evidence may not be available nor memories clear enough to conduct a productive investigation.

I am quite amazed that Mr Behrens has taken this approach, because what I am complaining about was well recorded in the transcripts of testimony and the court records taken down at the time. The Criminal Cases Review Commission (CCRC) currently has access to all the records from my case, and so it would appear to be quite a straightforward matter for the Bar Council to view any particular document that they needed to see as part of their investigation into my complaint.

To take this still further, I would hope that Mr Behrens is not making a claim that British justice relies on the memory of barristers - in other words, that if they have no memory of a particular case or event, then a complaint should not be investigated. This is a convenient attack of amnesia, and strange since it appears to correspond with Michael Mansfield’s own reply to me that he has lost his memory. 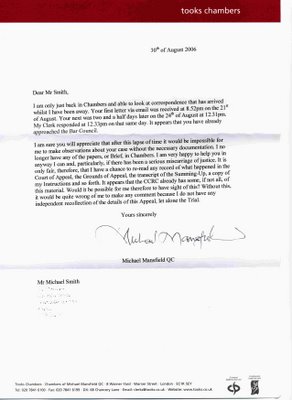 “Don’t remember nuffink Guv - do I”

According to the international quality standard ISO9000, it would be entirely unprofessional for any organisation, such as the Bar Council, to base their investigations and evidence on the memories of the individuals involved. Records must and do exist for important trials and appeals. After all, I am not basing my complaint solely on memory, but on what was contained within the documentary evidence from my legal case. So, I am making the point quite bluntly that records do still exist, and it would appear the Bar Council would rather that they didn’t exist.

In conclusion, I am very unimpressed by the way that the Bar Council has dealt with my complaint - it was totally unprofessional - and it goes without saying that I shall be continuing with my campaign, using whatever means are at my disposal. Eventually I will get to the truth behind my case.