Cryptome has published a legal argument which indicates that Section 1 of the Official Secrets Act has been interpreted in a wrong way in the past. This has implications for both past and future prosecutions under the Act. See the details on the Cryptome website. The full text is printed below.

Instructions
1. Within this parere pro veritate there is incorporated a written opinion on the interpretation of the provisions of s.1 of the Official Secrets Act 1911 which applies to the case of Mr Daniel James but also generally in all cases that have been prosecuted since 1911 but more so since the drafting of the European Convention of Human Rights. Para 2-17 I am indebted to Learned and Respected Queens Counsel from 3 Raymond Buildings, London. I would not seek to undermine the said position of those paragraphs. I differ on the issue of the word ‘enemy’ contained within the Act for the reasons set out post para.17

Conclusion on the Elements of the Indicted Offences
2. The prosecution must prove:

Count 3: Misconduct in Public Office
(1) the defendant deliberately neglected to perform a duty or deliberately misconducted himself;
(2) to such a degree as to amount to an abuse of the public’s trust in him;
(3) without reasonable excuse or justification;
(4) awareness of a duty to act – a high threshold – mistake not enough.

(c) obtains, [collects, records, or publishes,] or communicates to any other person [any secret official code word or pass word, or] any sketch, plan, model, article, or note, or other document or information which is calculated to be or might be or is intended to be directly or indirectly useful to an enemy;


4. ‘obtains, collects, records, or publishes, or communicates’
The meaning of ‘communicating is defined in s.12. Care needs to be exercised in deciding the appropriate word according to the article involved and the overall circumstances. The words used may indicate differing degrees of culpability and affect sentence.


7. Whether or not his purpose in communicating or collecting it was prejudicial is a question of fact for the jury: Chandler v DPP [1964] AC 763, Lords Reid 792 and Devlin 803.

8. Although witnesses may give evidence of the circumstances in which the information was communicated or collected and it may be inferred from the evidence, the opinions of Crown and defence witnesses as to whether communicating or collecting the information was prejudicial are inadmissible and irrelevant; Chandler v DPP, Lords Reid at 792, Radcliffe at 797, and Devlin at 803, 806, 811

9. In Chandler supporters of nuclear disarmament approached an air base; ‘a prohibited place’ with the admitted purpose of grounding all aircraft, immobilising the airfield and reclaiming the base for civilian purposes. The House of Lords held that where under the Official Secrets Act 1911 s.3 (as amended) the Secretary of State had declared the airfield to be a ‘prohibited place’ where damage, destruction, obstruction or interference would be useful to an enemy, the defendant was not entitled to give or lead evidence to show that, although he had done that which would be useful to an enemy, his purpose was not prejudicial to the safety or interests of the State. Crown witnesses gave opinion evidence and the defendant was prevented from doing so. As no other opinion was viable in the circumstances, the convictions were upheld.

10. The Crown alone is entitled to decide the disposition and armament of the armed forces and its decision cannot be questioned in a court of law. Lord Devlin said in Chandler, 'In a case like the present, it may be presumed that it is contrary to the interests of the Crown to have one of its airfields immobilised . . . The thing speaks for itself. ‘ He added that the presumption is not irrebuttable': (Chandler v DPP supra at 811 and 389–390 and see also R v Bettaney [1985] Crim LR 104, CA).

11. The defendant’s knowledge of the quality of the information as opposed to its content is irrelevant; R v Bettaney [1985] Crim LR 104 CA. The editor of the Criminal Law Review appears to argue that it is relevant, but is not convincing and in any event Bettaney is binding on the trial court.

12. The section refers to ‘any purpose’ and includes not only the ‘direct’ or ‘immediate’ purpose, but the ‘indirect purpose’ or ultimate aim, i.e., achieving the consequence which was intended to follow directly on the act; Chandler v DPP [1964] AC 763, Lords Reid at 774 and Devlin at 805-6. But see Lords Radcliffe at 795 and Hodson at 801 who say the jury should concentrate on the immediate purpose as motive is a reason not a purpose.

15. In R v M at p.24 Darling J referring to ‘intent to assist the enemy’, approved the direction of the trial judge; ‘whether the information was true or not which he was sending is, in my opinion, wholly irrelevant. If he was sending information which from its very nature he must have known would be of use or might be of use to the enemy, then that he sent wrong information would not be an answer to the charge. …. If the intention is to assist the enemy the offence is proved’. He added that ‘if he intends to inform and not to mislead he takes the risk whether it is false or not’.

16. The meaning of these words is not entirely clear. They appear to be directed to the nature of the information rather than the effect of its communication or collection. Our preliminary view is that where the word ‘intended’ is used, it refers to the defendant’s intention, but where the words ‘calculated’ or ‘might be…useful’ are used it refers to the quality of the evidence. If this is correct, admitting either of the two latter allegations as opposed to the allegation of intent might reflect a lower culpability for purposes of sentence.

Existence of an enemy
18. The existence of an enemy is required for offences under section 1 subsections (b) and (c) of the 1911 Act and for offences under the Defence of the Realm Act 1914 and the Defence Regulations (R v M). The word “enemy” does not necessarily mean some one with whom the UK is at war, but a potential or possible enemy with whom it might some day be at war; R v Parrott (1913) 8 Cr App Rep 186, CCA.

19. The absence of an ‘enemy’ produces the result of a nullity and a defective indictment.

20. Case law suggests that the ‘enemy’ need not necessarily be identified as in R v Britten and R v Bingham ([1973] 2 All ER 89. Those cases were wrongly decided.

21. In any criminal trial the onus is on the prosecution to prove its case. It must prove all of its case and not simply part of its case. If the prosecution is permitted to ‘presume’ that a certain country is a country ‘one day the UK could be at war with’ it would violate violently the provisions of Art.6 of the ECHR namely a fair trial.

22. The question to be asked is simply this: how does the prosecution prove its case when it is clear that within the Statute the word ‘enemy’ is predominant and a pre-requisite for the indictment to ‘bite’?

24. If the word ‘enemy’ was meant to be passive then why would the legislators have inserted the said word predominantly within the Statute?

25. Further, since the Official Secrets Act 1911 is a penal Statute it must be interpreted strictly and any doubt must be in favour of the defendant/accused.

26. For too long the Prosecution have simply submitted an indictment and never had to prove its case regarding what or who is the ‘enemy’. If information is passed to a friendly country and not an enemy the rhetorical question remains as to whether an indictment could be raised.

27. In the current case but also in the cases of Britten, Betteny, Prime, Smith et al were decided on the basis of ‘presumption’ and not by admissible evidence.

28. I am of the opinion that to prove any case within the Official Secrets Act 1911 evidence must be obtained that the country concerned is indeed a country that one day the UK could be at war. It cannot be presumed or even worse assumed for the reasons stated.

29. It is, of course, different if the country concerned is a country that the UK is formally/legally at war. But even then one could require the Prosecution to produce the appropriate Note Verbale from the Foreign Secretary attesting that formal exchanges have been made with the specific country.

30. There has to be a difference between evidence obtained de facto and de jure.

31. The appropriate manner in obtaining the necessary admissible evidence can only be from the Minister of Defence. If the Minister confirms that ‘X’ country is indeed a country that one day the UK ‘could’ be at war with, thus complying with the case of R v Parrott (1913) 8 Cr App Rep 186, CCA, then the indictment can be deemed effective but without such clear evidence any indictment in its current form is defective and violate the rules of evidence, shift the burden from the prosecution in proving its case, and violate Art.6 of the ECHR.

32. It follows that in my view all cases that have been prosecuted in the United Kingdom on the basis whereby the ‘enemy’ has not been proved are unsafe and should be subject to review.

33. I, of course, understand the consequences of the above and I am aware that because of this historic failure on the part of the Prosecution may well lead ‘so-called’ guilty persons to having their convictions overturned.

34. It is never a good practise to use the law and vices within the Statutes for these purposes.

35. But within the Official Secrets Act 1911 errors have been made from the start and were identified as early as 1913 as in the case of Parrott. It was at that stage the legislators should have intervened but failed to do so carrying forward with each and every case a fatal flaw in the jurisprudence.

36. At some stage and certainly by 1953 with the advent of the European Convention of Human Rights the said Official Secrets Act 1911 should have been amended.

37. No alteration having been made especially in the use of the word ‘enemy’ means as stated that all decided cases either at trial or appeal were erroneously decided. Evidence of ‘enemy’ is a pre-requisite. If there is a failure in the definition and an ‘enemy’ cannot comply within the meaning as per R v Parrott (1913) 8 Cr App Rep 186, CCA then the prosecution fails from the start.

38. In this present case the Minister of Defence must either be called as a witness or a written statement taken confirming either way that the said country contained within the opening note or allegations is indeed a country that the UK could one day be at war. If that evidence is either ‘missing’ or for whatever reason unable to be obtained an application must be made to stay the indictment.

39. In cases where convictions have been obtained on the basis whereby the word ‘enemy’ has not been proved the CCRC is the appropriate body for applications to be made.

I then received a letter from Tank Jowett Solicitors asking me to take this post off my blog:

It has recently come to our attention that a "legal argument" has been published on your website on 23rd September 2008, regarding the interpretation of the Official Secrets Act.

Please note that Counsel from 3 Raymond Buildings did not give permission for this document to be published amended or otherwise. 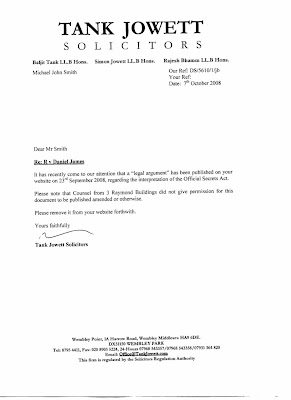