Anyone following the case of Daniel James will get a strong sense of déjà vu after reading about the story of Milos Stankovic. The two cases are so remarkably similar that they could have been based on the same agenda to undermine the good name of the British army.

Both of these men were born outside the UK, and through their family background they became fluent in their native languages, which enabled them to communicate with the local people when they worked under British command in war zones. In both cases these men were accused of having communicated information to the enemy, but in Mr Stankovic’s case those allegations were later dropped. Only time will tell if Mr James’ case goes the same way.

But why did these two cases arise in the first place? There have been rumours that they were both the result of jealousy by the CIA, because the British had been more successful than the Americans in dealing with local people. The heavy-handedness of US strategy has been only too evident in the past, when they have resorted to carpet bombing and machine gunning the local population, which usually leads to tragic results. The British have tended to favour the more humanitarian tactics of appealing to the locals, in order to win over their hearts and minds.

Whatever is behind the Daniel James’ case, he has not been treated in a very compassionate way. Locked up in Wandsworth prison for 6 months, Daniel has already effectively served a one-year sentence, and so far he has not been convicted of anything.

Like Mr Stankovic, Daniel James has received great support from the army comrades he worked with, and he is clearly much liked by those who know him. Perhaps Daniel is respected because he shows such genuine kindness and sympathy to those he meets. One report stated that Daniel had given $70 from his own pocket in order to help a destitute family he met in Afghanistan - money he had earned from teaching salsa dancing, but no doubt this will be viewed with suspicion by those behind his prosecution.

It is apparent that political motives lie behind both the cases of Daniel James and Milos Stankovic. Maybe we shall never know the truth, although it is obvious that some person or organisation made an accusation that Daniel had communicated with the enemy. Let us see whether this accusation amounts to anything serious, or if it is merely another CIA man crying “wolf”.

I came across an old newspaper cutting that I had saved about the Milos Stankovic case. At the time it was published I was surprised by the story, and I never believed that anything like it could ever happen again. How wrong I was.

A high-flying officer in the Parachute Regiment is to sue the Ministry of Defence for compensation because his career was blighted by a 20-month investigation into false allegations that he spied for the Bosnian Serbs.

Major Milos Stankovic, who believes the allegations against him were politically motivated, also wants to use the legal action to force the ministry to open files that will reveal the identities of his accusers. 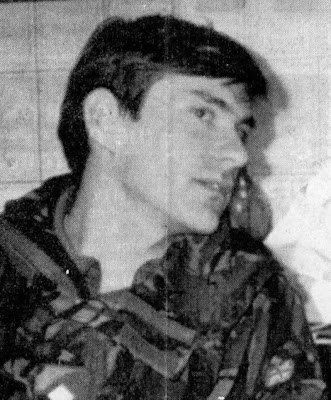 In the front line: Milos Stankovic in Bosnia in 1993

Last week friends of Stankovic revealed for the first time the full details of his ordeal which started in October 1997, two years after he had finished his service in the Balkans. There, as chief liaison officer for two United Nations commanders, he had been highly commended, by senior officers and recommended for promotion. He was arrested at the Joint Services Staff College, Bracknell, Berkshire, while studying for exams that would have enabled him to become a lieutenant-colonel.

Stankovic is not allowed to speak to journalists because he is a serving officer. This weekend Stephen Barker, his solicitor, said he would demand full disclosure plus compensation for the infringement of Stankovic’s legal rights. “This was a man who was responsible for saving the lives of hundreds of people through his negotiations,” Barker said. “He risked his life every day to talk with men he hated. His reward is to be ruined by people who lack the slightest comprehension of the environment in which he was forced to operate.”

The officer, whose father is Yugoslavian, had already made a successful career in the army when the Bosnian conflict broke out. His fluency in Serbo-Croat, coolness under pressure and ability to talk to Bosnian Serb leaders on equal terms made him invaluable. He soon became an aide to General Sir Michael Rose and later to Lieutenant-General Rupert Smith. 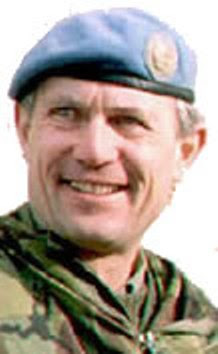 Friends say that immediately after his arrest, Stankovic was denied basic civil rights such as telephone calls. Later he was refused access to items taken from his home and was shown complicated witness statements only 24 hours before his final interview - allowing him no time to prepare a proper defence.

The friends also allege that although he was told he had been arrested under a section of the Official Secrets Act which deals with “damaging disclosures”, nobody was able to tell him what he was alleged to have disclosed or to whom.
They also complain that:

• He was denied access to army funds or lawyers for his defence.

• Serving army officers were told not to co-operate with his defence.

• A Royal Marines officer was questioned about an incident in which Stankovic saved a woman shot by a sniper and suggestions were made to him that details of heroism were untrue.

• Stankovic’s home was ransacked in a “high intensity” search.

Barker said: “They took everything, including sandpaper, an A-Z map of London, holiday snaps, Christmas cards and an ancient copy of Playboy - it was indiscriminate.”

When the 12 defence ministry police officers assigned to the case finally interviewed Stankovic in October last year, after spending tens of thousands of pounds interviewing 107 people in America, Germany, Switzerland, Cyprus and the Balkans, their only specific area of questioning was over the contents of Stankovic’s letters to his father Radomir, who died shortly after Stankovic returned from Bosnia.

A friend said: “They were insinuating that Stankovic was feeding secrets through his Serbian father. It was ridiculous because his father spent years fighting the Nazis and the communists.”

Stankovic’s second and final interview was to have lasted two days. It took just 1 hr 50 min after the custody sergeant at Guildford police station in Surrey pointed out that the questioning was illegal under the Police and Criminal Evidence Act.

The Crown Prosecution Service dropped the charges against Stankovic last week, claiming that there was insufficient evidence to mount a prosecution.

During his ordeal Stankovic received enormous support from senior army officers. One of the first to stand up for him was Lieutenant-General Mike Jackson, commander of Nato forces in Macedonia, who told defence ministry police they were investigating a grudge.

Martin Bell, the independent MP for Tatton and former BBC war correspondent who won acclaim for his coverage of the Bosnian conflict, has started moves to identify Stankovic’s accusers. He has written to Doug Henderson, the armed forces minister, demanding that Stankovic be told who had smeared him, The campaigning MP has also called for an adjournment debate so he can cross-question the minister in the Commons and force him to make a statement.

A spokesman for the defence ministry police said the Official Secrets Act prevented Stankovic being told the source of the allegation but insisted it had been duty-bound to investigate.

For Stankovic, any explanations will come too late. The stress has caused his girlfriend to leave him, brought heart-ache and worry to his mother and. led to his own mental and physical deterioration. His career was damaged because he was unable to complete studies for promotion exams.

This weekend a high-ranking officer said: “The British Army was Milos’s life. But it has been-ripped from him and he’s just been left to twist in the wind for 20 months. It’s scandalous and an awful waste when the army desperately needs men of his calibre, knowledge and expertise in the Balkans.”
Posted by mjs at 5:33 PM 3 comments: