Holiday in Portugal or KGB operation?

Those readers who have managed to struggle through any of the "The Mitrokhin Archive" (1999) - that intensely boring book by Professor Christopher Andrew - will realise it makes War & Peace seem like an easy page-turner in comparison.

Everybody knows that Andrew is a puppet and mouthpiece for the British intelligence services, so you would expect him to be privy to some pretty important and compelling information. It is disappointing therefore that much of his revelations about my case appear to have been cobbled together from old newspaper articles, rather than the fresh and accurate "intelligence" you might have expected from one so exalted as he.

I just want to concentrate on one issue here. I want you to find for me, in Andrew's "Archive", where he identifies me being sent to Oporto on a KGB training mission. After all Andrew, unlike our elected leaders, was alone given sight of Mitrokhin's scraps of paper revealing what the KGB is alleged to have known about me.

This was a key issue that led to my conviction: the fact that I had saved an old street map of Oporto, from my holiday in Portugal in 1977. The crosses and marks on this map were indicative of KGB instructions, Oleg Gordievsky had claimed at my trial in 1993. As this was such a vital part of the Prosecution case, this one small map was used to allow in all sorts of other evidence, such as the role of the American KGB recruit Mr E, and the use of Portugal as a place where the KGB used to meet its agents. It was a very damaging map to my Defence at trial, simply because I had kept the map in a drawer for 15 years as a memento of that holiday.

So where is this Oporto operation referred to in the "Archive". I would be very interested if you can point me to it. Please let me know on which page I will be able to find it. If you cannot find a reference to Oporto, then ask Christopher Andrew to point out where that detail is located in his book. You can contact Professor Christopher Andrew at Cambridge University:

I shall return to this matter in a later post, because the full story is rather interesting.

Now, I would like to introduce you to some "unused" evidence. This was a Witness Statement taken by Special Branch police from my friend John Watson. The reason it is called "unused" is because this was evidence that was not considered useful to the Prosecution at my trial.

You may ask: "why was it not useful, if Mr Watson referred to the holiday in 1977"? Well, that is a good point, and it shows that the Prosecution is not interested in the truth, but merely to show the jury all the evdience that they believe would lead to a conviction. Despite my protestations that I was only on a holiday in 1977, here we have the Prosecution saying "no, we have removed all the evidence that suggests it was a holiday, which allows us to conclude it was a KGB mission"

Here is John's evidence to the police: 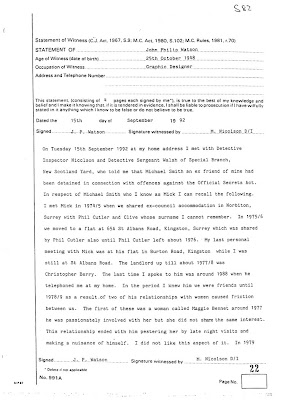 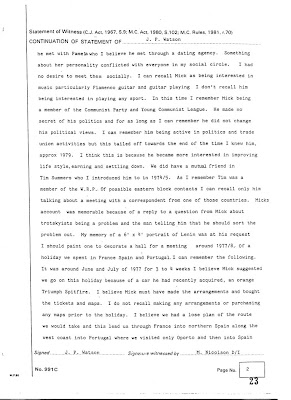 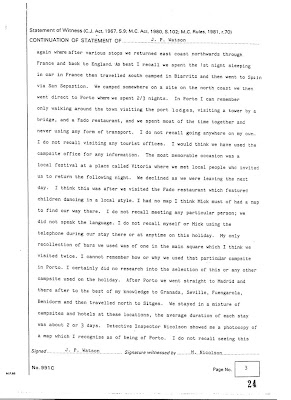 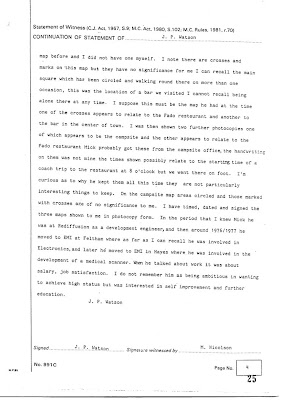