Thurrock Youth Theatre's production of "East Lynne" was well-received by the audience in December 1966. Although this was a Victorian melodrama, it was presented in such a way to play to the attitudes of the 1960s.

Sonja Kristina (aka Sonja Shaw) was also mentioned in this review, as my second wife Barbara Hare. Sonja is still working with the group Curved Air and also working with musician Marvin Ayres under the name Mask. Ockendon Courts History teacher Peter Green produced the play.
Posted by mjs at 7:29 PM No comments:

Thurrock Youth Theatre presented a version of the old Victorian melodrama "East Lynne" at Ockendon Courts school, in 1966, in which I played the part of Archibald Carlyle. It was one of those plays that involve a lot of over-acting, but it was a lively production and very well-received by the audience.

Margaret Morgan was also in the play. Margaret was one of those perfect women who we only meet once in a lifetime - I wish I had had the courage to invite her out on a date. 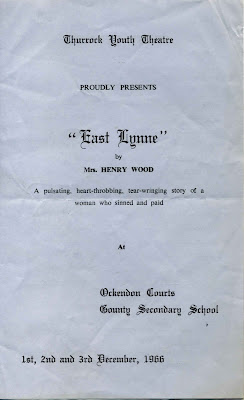 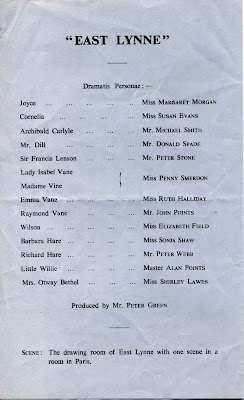 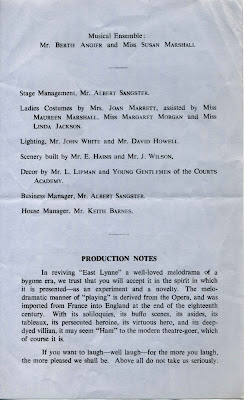 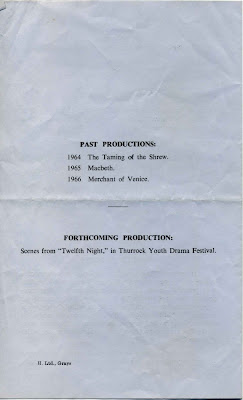 This is the text we used for the production:
Sonja Kristina played Barbara Hare in East Lynne

Thurrock Youth Theatre created a production of the Merchant of Venice early in 1966, in which I played the part of Salarino. This was a very good production in my opinion, and extremely dramatic. Interesting with the new ideas on Shakespeare - was he Italian, or did he spend time in Italy to understand the way of life in Venice? It was a very exciting time to be playing these roles in a local theatrical group.

Peter Green, the History teacher at Ockendon Courts school, was also the key person who ran the adult group, the Courts Players (now called the Thurrock Courts Players - great to see they are still performing), who performed various plays at the Ockendon Courts School hall in the 1960s. I particularly remember a great production of the "Love of Four Colonels" by Peter Ustinov, which made a big impression on me.

Peter Green also ran the Thurrock Youth Theatre group and he was behind many productions, including the ones I was involved in. In Peter Green's version of the Merchant of Venice, I was particularly taken by the folk-singing of Sonja Shaw - she also played the guitar as well as being a promising actress - and Sonja was later portrayed on the front cover of the BMG magazine that I subscribed to: 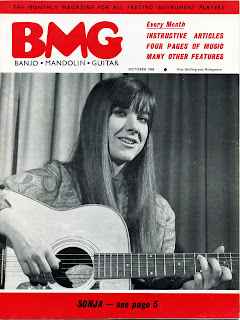 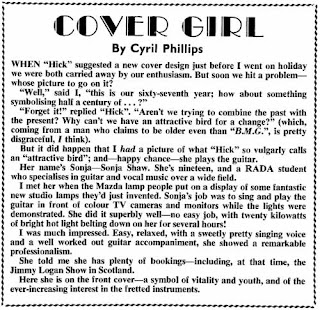 ... Her name's Sonja - Sonja Shaw. She's nineteen, and a RADA student who specialises in guitar and vocal music over a wide field.

I met her when the Mazda people put on a display of some fantastic new studio lamps they'd just invented. Sonja's job was to sing and play the guitar in front of colour TV cameras and monitors while the lights were demonstrated. She did it superbly well - no easy job, with twenty kilowatts of bright hot light belting down on her for several hours!

I was much impressed. Easy, relaxed, with a sweetly pretty singing voice and a well worked out guitar accompaniment, she showed a remarkable professionalism.

She told me she has plenty of bookings - including, at that time, the Jimmy Logan Show in Scotland.

Here she is on the front cover - a symbol of vitality and youth, and of the ever-increasing interest in the fretted instruments.


Where are you now Sonja Shaw, you were such a lovely person ... ? Below is the programme for the Merchant of Venice play from 1966: 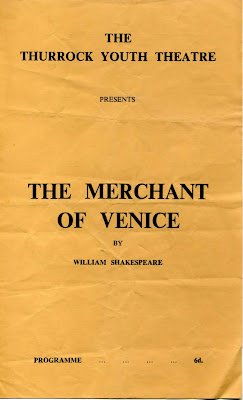 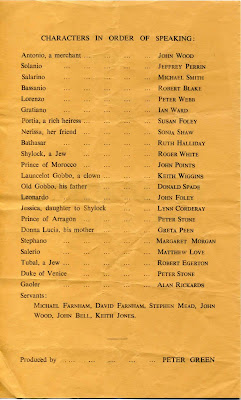 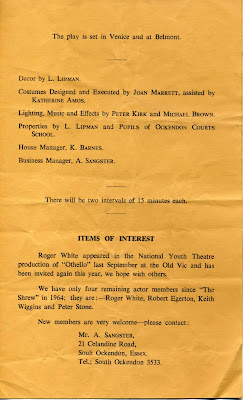 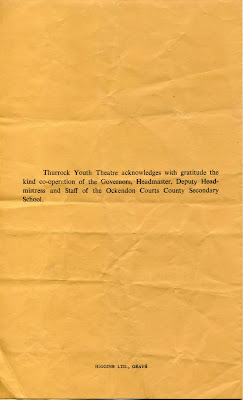 
This was the text we used for the production:

OK I just found some new information with the help of Google [April 2012]: Sonja Shaw became Sonja Kristina at some point, and she has been involved in various groups performing folk rock and acid folk. I never knew that Sonja was in "Hair" - there is even a video of her in 1968:

Then Sonja became involved with Curved Air and was featured in various videos from the time:

Sonja was also involved in the Thurrock Youth Theatre play East Lynne in which I was a fellow cast member. This was reviewed in the Thurrock Gazette. Sonja's father was the headmaster at Ardale school in North Stifford.
Posted by mjs at 3:34 PM No comments:

In November 1965 I took part in one of the famous Ockendon Courts school plays. They were produced by our History teacher, Peter Green, who was very keen on drama and who was a main figure in the local acting community within the Thurrock area. Apart from the Ockendon Courts school plays, Peter Green was also a key person organising the Thurrock Youth Theatre and the Courts Players.

Below is a programme of the play I was in while at Ockendon Courts school: 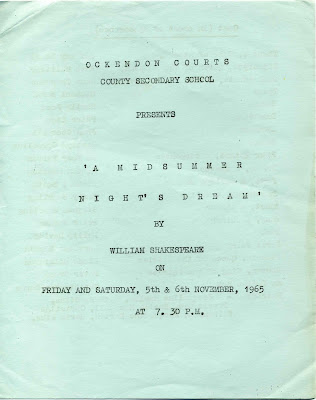 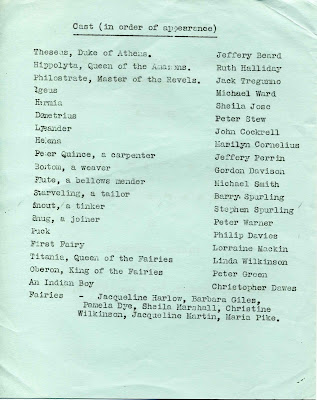 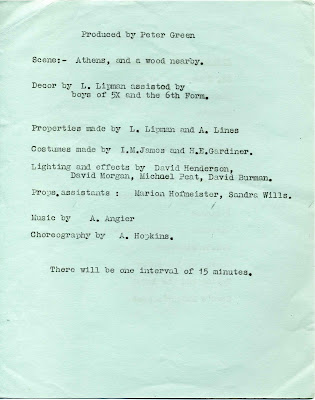 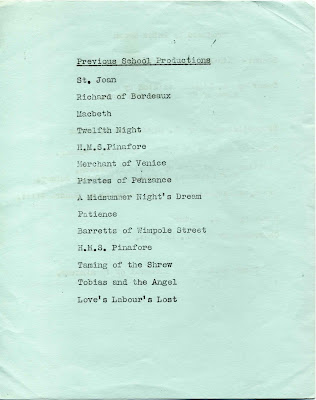 A Midsummer Night's Dream programme page 4
Posted by mjs at 2:14 PM No comments:

Who cannot have waited with fear or anticipation at the reading of their school report? My school reports were usually good, but not perfect. 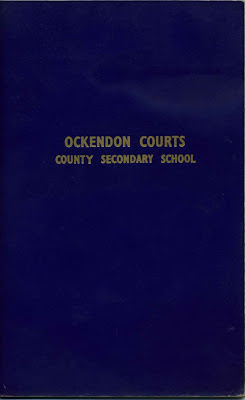 Cover of Ockendon Courts County Secondary school report
I expect that there are many other people out there who also have one of these reports. Treasure it for the experiences that it represents.
Posted by mjs at 1:22 PM No comments:

Ockendon Courts County Secondary School was where I completed my secondary school education between 1960 to 1967. It was a quite remarkable school in many ways, which was in part due to the vision of the headmaster Mr W. S. Larwood, and other members of staff such as Mr Reuben (Ben) Cohen and Mr Peter Green.

Where would we be without schools such as Ockendon Courts? This was one of the great places on earth, and it is now gone. Long live Ockendon Courts!!!


I remember that there were occasional football or basketball matches with the pupils from nearby Ardale School in North Stifford. The headmaster at Ardale School at that time was Mr Shaw, and his beautiful daughter Sonja Shaw later became the legend Sonja Kristina, who still performs with the group Curved Air and also with Martin Ayres as Mask, and on MySpace.
Posted by mjs at 1:00 PM 4 comments:

John Kelsey-Fry QC should be asked to undergo a polygraph lie detector test to ascertain his role in the evidence at my trial, particularly regarding the witnesses Oleg Gordievsky, Dame Stella Rimington and Professor Meirion Francis Lewis.

Clearly Kelsey-Fry played at least some part in the preparation of these parts of the prosecution case, and he was also responsible I understand for much of the communication of information between the Prosecution and Defence teams - it was the withholding of the Prosecution case and evidence regarding the ALARM missile that was so damaging to the Defence at trial.

The underhanded Prosecution tactics - nothing but a bare-faced "ambush" - were designed to undermine the way in which the Defence had prepared their case. Not only had the ALARM missile never been previously mentioned in the Prosecution case, until Professor Meirion Lewis appeared in the witness box, but the Prosecution had up till that point not made any serious allegations about the relevant exhibit: a 10-year old obsolete and low-level 9-page document.
Posted by mjs at 5:08 AM No comments: