I am waiting for The Cambridge Parrot to talk
I gave my old friend Professor Christopher Andrew a phone call tonight. I thought I ought to talk to him, because he has some errors or anomalies in his book, the Mitrokhin Archive. I think we need to talk about this to decide if he has wrong information, or possibly he has misunderstood the facts.

Well, let's see if he gets back to me. But I just want him to explain why I was convicted based on a KGB training mission to Oporto (Portugal) in 1977, when there is absolutely no mention of my visit to Oporto in his book the Mitrokhin Archive? Strange that, isn't it?

I spent just 3 days in Oporto in 1977, from 11th to 13th August 1977, as part of a camping and driving holiday with a friend. We pitched our tent in a camp site on the outskirts of the city, and then spent our time sight-seeing, visiting the Port works, as well as going on an excursion to the popular tourist restaurant O Fado. No Russians were involved in our activities in Oporto, but the Police, MI5, and the Prosecution at my trial were keen to tell the jury that this was really a KGB training mission.

It appears that this crazy fabrication by the Prosecution at my trial was meant to link up with what they knew would eventually be disclosed in Professor Andrew's book, the Mitrokhin Archive. For example, the Special Branch policeman who interviewed me in August 1992 said:

‘And you will be aware also, of the archivage leaks that have taken place over the last number of ...’ [Police interviews p.122]

During those interviews I was shown a tourist map of Oporto, which later became a key exhibit at my trial. As the interviewing officer DCS Malcolm McLeod put it:

‘During the search of your house we found some literature, and I’m going to produce exhibit JS/45, and this is a map, a tourist map, of the centre of Oporto.’ [Police interviews p.534]

It was not until 1999 that I learned the evidence given at my trial by Stella Rimington and Oleg Gordievsky contradicted information contained in the Mitrokhin Archive. In that book, published by Professor Christopher Andrew, there are two references to the Iberian Peninsula. On page 551 Andrew states:

'The first test, which Smith seems to have passed, was to remove two packets of secret material from a dead letter-box in Spain.’

On page 552 Andrew goes on to refer to another “test” that I was allegedly subjected to:

'… by instructing him to remove a container holding two rolls of film from a DLB in the Paris suburbs and to deliver it to a KGB officer in Lisbon,’

The single reference to Portugal in the Mitrokhin Archive is an alleged trip to Lisbon, some 200 miles away from Oporto, which is placed in 1979 or later. I never travelled to Portugal in 1979, and I have not visited Portugal at any time after 1979.

So what is going on here? There is one explanation that the agent recruited by Viktor Oshchenko in London, referred to as Mr E at my trial, did in fact go on a KGB training mission to Lisbon over the weekend of 21 to 22 July in 1979. MI5 were cynically trying to make it appear that I had done the same thing when I was on my holiday in Oporto. What MI5 hoped to achieve was to create links to both Mr E and Oshchenko through Portugal, and they succeeded because the jury did believe their lies in this fabricated story. 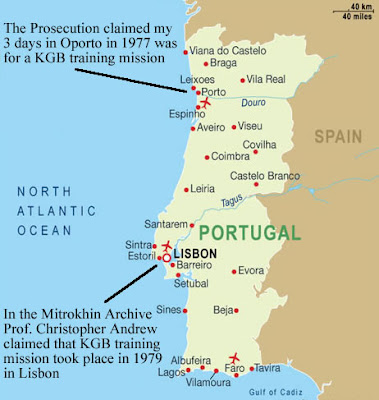 The obvious contradiction between the Mitrokhin Archive version and the Prosecution case at my trial
Following on from the above, I have been contacted by Nelly Symonds who I referred to in a previous post. In that post I reported how Professor Andrew had apologised to Nelly, and he undertook to ensure that the false allegations against her were not repeated in future editions of the Mitrokhin Archive.

Nelly has informed me that Professor Andrew has completely reneged on this agreement, and the false allegations which he agreed would be removed have been repeated all over the world in different language editions. Nelly thinks that this is the behaviour she would expect from a Cambridge pseudo professor aping the manners of an English gentleman.

Anyway, anybody who wants to contact Professor Andrew about this can ask him directly by contacting him at his home: