Readers of my blog will be aware that I am currently awaiting confirmation of the accuracy of key evidence given by Professor Meirion Francis Lewis at my trial, and the person who can resolve this issue is Mr Martin Winstone of MBDA.

The evidence in question concerns Exhibit pages 51-59, from the document bundles used at my trial, which can now be viewed on the Cryptome website. Although Mr Winstone’s name appears on this document, together with the names of 15 other individuals, not one of them was apparently interviewed by the police about it. Is that not a very curious and incomprehensible feature, considering that this document turned out to be the most important exhibit in the whole case?

The Criminal Cases Review Commission is currently in communication with Martin Winstone, to determine the exact significance of the document’s contents. However, there still remain some anomalies about what happened during the period leading up to the point when Professor Meirion Francis Lewis gave evidence at my trial on 7 and 11 October 1993.

Just what was the communication made between Professor Lewis and Reginald Humphryes, and was Martin Winstone the man who told Reginald Humphryes that the document was used on the ALARM project? Certainly, Mr Winstone is the most likely source of information about the project that linked to that restricted document (Exhibit pages 51-59).

As it does not involve any sensitive information, I decided to contact Martin Winstone directly, and to ask for his help to resolve a couple of important points concerning what happened around the time of my trial. Below is a copy of the email I sent to him:

I apologise for having to contact you again, but I believe that you are the only person who can help me resolve the anomalies within my case.

I understand that the Criminal Cases Review Commission has contacted you to confirm whether or not an exhibit at my trial in 1993 was actually ever used on any ALARM missile. I shall await your reply to the CCRC’s questions, and I will not interfere in that process.

The issues that concern me now, and which could well lead to the satisfactory resolution of my case, are quite simple and involve no sensitive information. I propose to ask you only 2 questions regarding the events of 1992/3:

(1) Were you approached or interviewed, by either the Police or the Ministry of Defence, between August 1992 and October 1993 with respect to the MSDS document 79481/PBH/BB/SO8 (draft issue 2)?

(2) Is it not a fact that you had communication with Mr Reginald Humphryes in October 1993 regarding the possible significance of the said document?

I think you will appreciate that these questions only require a “yes” or “no” answer, and that they do not involve any classified information.

My only desire is to establish the truth and to finally put this matter to rest, and I would be eternally grateful for any help that you can give to me.


Well, we shall have to wait and see if Mr Winstone responds to my plea for help.

It is strange how people like Martin Winstone can appear quite austere and unapproachable when they are seen in their professional role. However, it appears that Martin is keen on badminton, and that conjures up an altogether different image of him. Similarly, Professor Lewis is passionate about stamp collecting - it’s quite sweet really.

So, possibly one of my readers, or even one of Martin Winstone’s friends, neighbours, or fellow badminton players might encourage him to provide me with the answers I need. Mr Winstone can be contacted at his home address below: 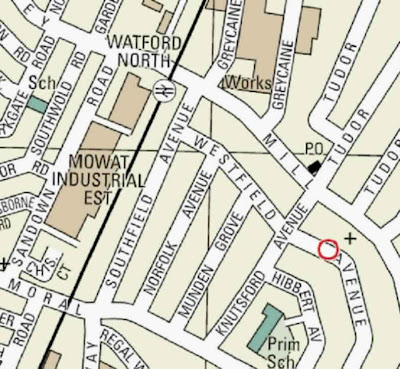 Martin Winstone lives here in Watford
Posted by mjs at 7:27 AM No comments:

After all the celebrations and hangovers of the past few days, I can finally get around to reporting that my parole licence ended on 8 August 2007. I was so busy last week that I even forgot to attend the last meeting with my Probation Officer, and I had to set another appointment.

It's quite a relief not to have to report to the Probation Office any longer, and I am now free to leave the UK for the first time in 15 years. More importantly, I no longer have to be careful at what I do to progress the investigations into my conviction for espionage, whereas previously I was under the threat of being returned to prison if I overstepped the mark.

So, a new era begins, and we shall have to see where destiny leads me.
Posted by mjs at 6:47 AM No comments: