The ARmy Rumour SErvice (ARRSE) has done me a favour by publicising my case on their website, which has brought a flood of new visitors here to my blog. I had been disappointed with the ARRSE moderators reaction, when they banned me from their forum in August, but I am now grateful that these moderators have seen sense and decided to make an issue of my case. 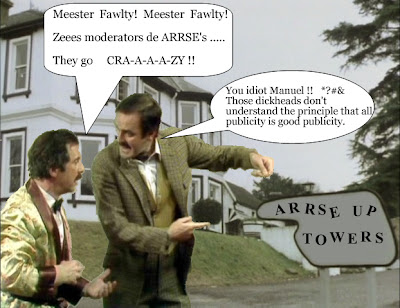 ARRSE scores a home goal
Perhaps I am the brave one, for coming out and saying things under my own name. The ARRSE moderators hide behind their camouflage of anonymity, and snipe away in the belief that no one will ever know who they are.

I feel duty bound to point out that the ARRSE article about me makes certain factual errors:

1. It is suggested that I learnt the art of cleaning my cell. Anybody who knew me at HMP Full Sutton will know that I rarely did any cleaning in my cell. I was a guest of Her Majesty, and guests are not expected to clean their own rooms. Would you expect to stay in a hotel and also do the cleaning? No, there are prison officers available who can do this work.

2. It seems that ARRSE moderators believe I would have helped the prison chaplain. There was never a time in prison when I had any communication with a chaplain. Why would I help somebody that I believe is talking mumbo jumbo? I subscribe to the
Richard Dawkins view on religion - I’m believer in science, not a believer in blind faith.

3. There seems to be some muddled thinking on another point. The claim is made against me: ‘he … decided to sell his soul for a pathetically small sum of money. To this day, he contends that is(sic) was a conspiracy that put him away, thus proving that Smith was only in it for the money.’ It seems rather contradictory, that it was a ‘pathetically small sum of money’, but that I ‘was only in it for the money’? This was not the main argument made by the Prosecution at my trial, where it was asserted that I was ideologically driven, which was of course nonsense.

4. The article goes on to talk about me as being a ‘foul communist’. It is true that I was a member of the CPGB, as well as the YCL, but I left those organisations at the end of 1975. Apparently, to the elephantine brain of an ARRSE moderator, a period of 32 years is like the blink of an eye, although to me this all seems a very long time ago, and I have certainly changed greatly in the meantime. Nonetheless, if our past activities are never allowed to leave us, then there will be a lot of people in ARRSE who would be embarrassed to have it publicised what they were up to some years ago, whether that be acting like drunken hooligans on a Saturday night, or some perverted sexual practice - you know the sorts of things, don’t you guys.

5. The ARRSE moderators refer to exhibits used to convict me, by saying that ‘very little of which was classified higher than Secret’ and they then go on to quote from information disclosed by the MoD during my Appeal, that ‘In the case of the other current weapon system, the detailed information contained in the document … should have been classified SECRET’.

There has been an attempt here to hype up the value of the information said to be in my possession. None of the exhibits were classified SECRET, or even CONFIDENTIAL. The only classification used on exhibits was RESTRICTED, which, as I’m sure you know (i.e. anyone who has worked with classified documents), is the lowest level of classification. In fact, it was only one classified document, ID No. 79481/PBH/BB/SO8 issued in 1982 and marked RESTRICTED, which the Prosecution used in their arguments about “sensitivity” - the document was claimed to have been used on the ALARM missile. Dr Meirion Francis Lewis claimed a link to ALARM during his testimony in court; he said this link was confirmed during a phone conversation with a friend of his at Marconi (a Technical Director there). The Technical Director, Reginald Humphryes, in turn, said he had been given this information by somebody working in that part of Marconi dealing with ALARM, a person whose name was never recorded. So, it was a chain of Chinese whispers, or hearsay evidence, which finally convicted me.

I have recently discovered that the evidence given by the MoD in 1995 - that the RESTRICTED document should have been classified SECRET - is a very strange thing to say, because in 1984 that document had been withdrawn from use. The document actually used on ALARM was marked UNCLASSIFIED, and so it seems the MoD need to explain why an UNCLASSIFIED document should have been marked SECRET? It would have made a significant impression on the jury at my trial to have been told the truth about that RESTRICTED document, No. 79481/PBH/BB/SO8.

6. The ARRSE article repeats the claim that I ‘sold information regarding the XN-715 radar fuse for the British WE177 free fall nuclear bomb’. This was never a part of my trial, and I have never been convicted of any offence involving my work at Thorn EMI. This claim against me originates in the 1995 Security Commission report on my case. Clearly, it was thought that the case would fail if brought to court; otherwise I would have faced that charge during my trial. We do not yet live in a totalitarian society where you can be simply declared guilty without a trial, although it would appear that ARRSE moderators believe they have been given the right to make such declarations of guilt.

7. I am being attacked for calling myself Gunner-smiff on the ARRSE forums. I fail to see how this is any serious matter. Everybody on the ARRSE forums call themselves by any name they choose, and all hide behind pseudo identities, as is quite common on most forums on the Internet. I never made any claims to have been a real “gunner”, and so my conscience is clear that I never tried to deceive anyone that I was somebody I wasn’t - I even revealed my true identity to those in the ARRSE chat room, who so vilely attacked me for speaking up for the truth.

8. I have been further criticised because I compared the Daniel James and Milos Stankovic cases. I do believe there are similarities between those cases, and Daniel has also been supported by his Army colleagues who worked with him. Anyone who tries to portray Daniel as a “spy”, or a “traitor”, obviously has not studied the details of his case. You can choose to believe the truth, or swallow the propaganda put out by the Prosecution side, but do not write off Daniel if you know nothing about him.

9. In referring to the set of witness statements from my trial, published on the Cryptome website, ARRSE says that they ‘have been heavily sanitised by Smith’. I fail to see what evidence ARRSE has that I have changed one word of those statements? In fact, it would be incredibly stupid of me to change those statements, since these are the evidence that I am currently working on with the Criminal Cases Review Commission (CCRC), to take my case back to the Court of Appeal.

If ARRSE find those witness statements hard to believe, then that is because my case was handled in so biased a way that it is difficult to see the evidence for spying within them. Just for the record, I decided to convert the statements into a MS Word document to: (a) make them easily searchable, and (b) make them more readable, because the originals are covered in my lawyers written notes, and the photocopies vary greatly in quality. I have no objection to sending copies of the originals to anyone who is particularly interested in any of them. I am sure that the version on Cryptome is accurate, and the only discrepancies are likely to be insignificant typos.
******
So, while I welcome the fact that ARRSE has decided to publicise details of my case, I would ask them to be a little more careful to stick to the facts, rather than increase the errors already attached to my story in the public domain. I hope ARRSE seriously check their facts, and that they also attach the same principle of accuracy to the use of weapons in theatres of war, as “friendly fire” seems to be a common cause of casualties in recent times.

I use the term “friendly fire” with good reason, because it appears that the ARRSE moderators want more than just to call me names. ARRSE moderators apparently want me dead, and seem to have issued a sort of ARRSE fatwa. Check out this email which I received on 29 November:

It’s always good to see a convicted criminal and traitor maintaining a steady air of innocence. It warms my heart to see that ultimately it's not about the politics, it's all about the money.

You may be interested to read that you now have your own entry on the ARRSE Wiki (here: http://www.arrse.co.uk/wiki/Michael_John_Smith) which I am sure you will find accurate. It's certainly much better than that bland version on Wikipedia.

As long as you continue to peddle your tired and pathetic version of events, ARRSE will be there to confound you at every turn.

May I take this opportunity to wish you nothing but pain and I earnestly hope that the end of your days comes only after a prolonged period of incredible suffering.

Please die soon - it's all a filthy traitor like you deserves.