"Worm" Justice Sir John Blofeld gets off the hook

When considering what type of people judges are, and how successful they are as practitioners of the law, I have come to the conclusion that a judge is no more than a failed barrister. A barrister, acting as a barrister, has to be entirely reliant on their professional reputation, and if they are not successful because they mess-up or cannot secure work, then no one will hire them and they become a liability to their chambers. With the top barristers easily earning a million pounds or more a year, why would such people choose to become judges, and earn a much lower salary, unless they were failures?

It is little wonder that the vacancies for judges get filled by those individuals who have failed the grade as junior barristers. Likewise, successful QCs who choose to become judges are a pretty rare breed indeed. No wonder that judges are the sort of lawyers who failed early in their careers, through their predisposition to make mistakes and act incompetently, and that within the legal profession this is common knowledge. In fact, it would be rather odd to expect that a man who was a failure as a barrister could ever become successful as a judge. Unfortunately, the legal profession protects its own, and the incompetent judges receive total protection whenever they make mistakes, idiotic rulings or display the signs of madness. The legal bodies stick together when things go wrong, and that is why the legal system in the UK is in such a poor state.

I stupidly thought that I would be treated with fairness by making a complaint to the OJC, but this attempt led to a rapid rejection by those who guard the judges’ reputations. This was my complaint:

For the attention of Ms Dale Simon

Re: trial of R -v- Michael John Smith (1993)
I am currently trying to discover the reasons why false evidence was given at my trial by the witness Professor Meirion Francis Lewis, and consequently repeated by Justice Blofeld in his Summing Up. The evidence was so prejudicial to my Defence case that I was found guilty of offences under the Official Secrets Act and sentenced to a term of 20 years imprisonment.

I did not learn until October 2007 that the “restricted” document had been made obsolete in 1984, over 8 years before my arrest, and it could not therefore have been used on ALARM missiles deployed in the Gulf War of 1991, which was the claim made by Professor Lewis. As Justice Blofeld singled out this evidence for special mention during his summing up, this must have had a significant effect on the minds of the jury when coming to their guilty verdict.

I cannot be certain to what extent Sir John Blofeld knew he was misrepresenting the “restricted” document, but he clearly was responsible for misleading the jury at my trial. I would like to see this matter investigated in order to discover what Sir John Blofeld knew about the false evidence, and whether he was aware that the document claimed to be highly sensitive was in fact obsolete.

I am trying to get my case back to the Court of Appeal, due to the gross unfairness of the above point and other serious deficiencies in the way the Prosecution were allowed to present their case in court. Ordinarily I would have waited for the Criminal Cases Review Commission to finish their review of my case, but they have proved themselves to be unable to deal with the technicalities involved. The CCRC has ignored detailed evidence I spent years preparing, which proved that Professor Lewis’s testimony could not be correct, and they never discovered that the “restricted” document was obsolete - a fact apparently widely known amongst those individuals who had been involved with it. For these reasons I believe that the CCRC have not conducted a thorough investigation of my case.

I therefore look to the Office for Judicial Complaints to discover why I did not receive a fair trial, and to what extent the conduct of Sir John Blofeld contributed to the miscarriage of justice that occurred in my case.


Below is the reply I received from the OJC: 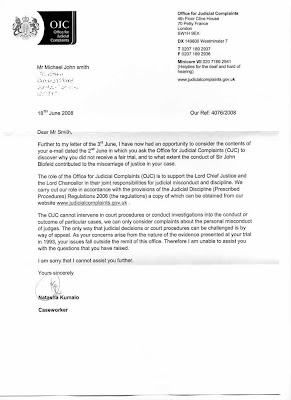 MinicomVII 020 7189 2941
(Helpline for the deaf and hard of hearing)
www.judicialcomplaints.gov.uk

Further to my letter of the 3rd June, I have now had an opportunity to consider the contents of your e-mail dated the 2nd June in which you ask the Office for Judicial Complaints (OJC) to discover why you did not receive a fair trial, and to what extent the conduct of Sir John Blofeld contributed to the miscarriage of justice in your case.

The role of the Office for Judicial Complaints (OJC) is to support the Lord Chief Justice and the Lord Chancellor in their joint responsibilities for judicial misconduct and discipline. We carry out our role in accordance with the provisions of the Judicial Discipline (Prescribed Procedures) Regulations 2006 (the regulations) a copy of which can be obtained from our website www.judicialcomplaints.gov.uk.

The OJC cannot intervene in court procedures or conduct investigations into the conduct or outcome of particular cases, we can only consider complaints about the personal misconduct of judges. The only way that judicial decisions or court procedures can be challenged is by way of appeal. As your concerns arise from the nature of the evidence presented at your trial in 1993, your issues fall outside the remit of this office. Therefore I am unable to assist you with the questions that you have raised.

I am sorry that I cannot assist you further.

Yours sincerely
Natasha Kumalo
Caseworker
Posted by mjs at 9:42 AM 1 comment:

There was a useful new judgement this week regarding the use of anonymous witnesses in trials, when the Law Lords ruled on the case of Ian Davis. The ruling has been published on The Times website.

In my own trial claims made by Viktor Oshchenko, Vasili Mitrokhin and Dr Reginald Humphryes were all put before the Court, with no attempt made to identify that they were the sources of the “evidence”, or any explanation why they were not going to be called as witnesses. These were effectively anonymous witnesses as far as the jury were concerned. However, with the draconian rules of the Official Secrets Act, and all such trials being held in camera, it seems this is just another “normal” practice that prosecutors can use to gain an unfair advantage, and they need such unfairness when they have a weak case and need to pull out all the stops. Why should anything surprise me when we are talking about the way that British Justice works?
Posted by mjs at 9:18 AM No comments: