The Probation Service gives me a warning

I was quite surprised to receive a Warning Letter from the Probation Service in this morning’s post. I had been thinking that the date of my next appointment was next Thursday, but it seems I got it wrong and it was in fact yesterday. 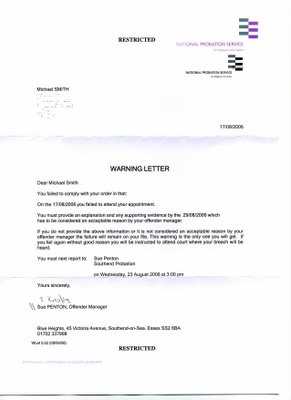 The Probation Service's Warning to Me
It might seem from the wording of this letter that I was in the habit of missing appointments, but the Probation Office’s records will show that this is the first time I have missed one of their meetings in more than 3 years and 8 months. So it might seem a bit harsh to start threatening me with court action, or to make it appear that some serious offence was being caused by me.

I had actually forgotten the date of this appointment as I have been working quite hard to prepare my case for the Criminal Cases Review Commission (CCRC) - working towards an appeal to prove that some corrupt and unethical practices had been used to gain my conviction in 1993. Not only do I believe the judge was extremely biased and doing all in his power to present me as guilty, but also the actual evidence being used to convince the jury was incorrect, fabricated and based largely on tricks employed by Special Branch to supply the prosecution with the evidence they could not obtain by the proper legal process.

So, while I was busy trying to prepare my case that those working in the British legal system were corrupt, the last thing on my mind was to attend a rather pointless meeting with my Probation Officer. I had intended to be there, but I am only human, and this time I was too wrapped up in my own problems to remember the date.

Yesterday morning, at the very time when I should have been at the Probation meeting, I was trying to contact my solicitor to discuss my case against my conviction. There are piles of documents and many complex issues for me to consider in how I might best present my arguments to the CCRC. So what was so pressing about me attending this Probation meeting yesterday, which caused them to get so upset?

In all the time I have been attending these Probation Office meetings I have failed to see what benefit they actually offer to me or the public. The few minutes a month that I am with my Probation Officer can serve no useful purpose in helping me “integrate back into the community”, or to protect the public in case I start selling secrets to the Russians, because nobody is taking any interest in what I am doing for the other 99.99% of the time, when clearly they are not watching me. To an observer, the small talk during these conversations would show what a poor service the Probation Office offers to the public, and I have never had the feeling that this organisation was competent, effective or efficient.

As far as I can see these Probation Service meetings are a complete waste of time and money for everybody involved, and this is particularly so when I was told very early on by my Probation Officer that I was considered a low risk - so why am I still having to see these people 3 years and 9 months after my release from prison? I have done nothing during all this time that would give anyone the idea that I was a threat to the nation or I had any criminal intent, and yet I have one of the longest periods of Probation that any Briton is likely to experience. All the Probation Service has done is to prevent me from getting on with my life by putting obstacles in my way, to ensure I am forced to live in the UK and to remain unemployed. Such an idiotic and ineffective system could only exist in a country like Britain.
Posted by mjs at 10:09 AM No comments: