Dame Stella Rimington visited the Perth International Festival of Arts in Australia on 26 February 2009. She gave a talk there which has been issued as a podcast on ABC Radio.

At first Tony Holland discussed my case with a couple of Stella Rimington's minders, who were sitting next to him in the audience at this event. He explained that there were issues that he wanted to raise with Rimington, and they were intrigued about my case, as they had never heard of it before.

Tony was introduced to Dame Stella, and asked if he could have his picture taken with her. Not suspecting that anything was wrong she agreed, and even managed a smile. 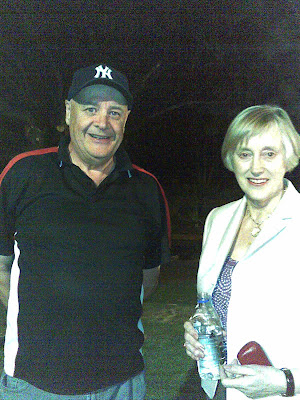 Then Tony Holland started to ask her about my case. At first she seemed confused and she said she couldn't remember it. As Tony became more insistent she became evasive. He asked her about the false evidence that she had been aware of concerning the ALARM missile, and the plot to fabricate evidence at my trial during the testimony of Professor Meirion Francis Lewis.

Dame Stella was clearly flustered and fiddled nervously with her glasses. She was afraid to say anything that might incriminate herself in some way. It was at this point, in front of other members of the audience, that Tony Holland accused Dame Stella of telling lies. It was an embarrassing moment for her, but there will be more such moments to come in the future. 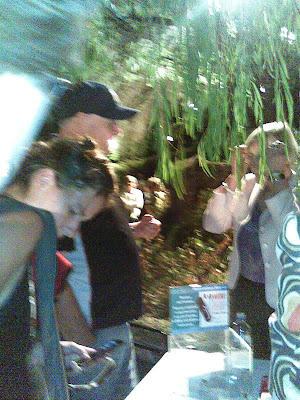 On 3 March 2009 in Melbourne Dame Stella Rimington did another talk about her life and career at MI5, which is available as a podcast. I wrote to Sue Turnbull, who is an Associate Professor in Media Studies at La Trobe University, who shared the platform that day. Below is a copy of my e-mail to Ms Turnbull:

I listened to your podcast with Stella Rimington from 3 March, and was struck by the friendly easy-going nature of the conversation.

Unfortunately, you were only seeing the false disguise of Ms Rimington's public persona. In the early 1990s Stella Rimington was responsible for engineering my conviction under the UK's Official Secrets Act. She set about an entrapment operation that was aimed at making it appear that I had been dealing with the Russian SVR intelligence service, and I was subsequently put on trial largely because of Ms Rimington's desire to capture a "spy".

Stella Rimington gave evidence at my trial (documents now published on the Cryptome website in New York) and she made claims that I had been recruited to the KGB by a Russian defector names Viktor Oshchenko. She went into some detail about Oshchenko, and how he had been identified as a Russian agent-running KGB officer with 12-18 months of his arrival in London. It was some surprise to the court, however, that after Ms Rimington's detailed explanations of how espionage works in such cases, she had to admit under cross-examination that MI5 actually had no evidence that I had ever met Oshchenko. So Ms Rimington's claims about my espionage with Oshchenko was in effect nothing more than speculation.

Ms Rimington had learned early in 1992 that another Russian defector, Vasili Mitrokhin, had brought some pieces of paper claimed to have been copied from KGB archives to British Intelligence. Apparently my name was mentioned in these papers, although nobody is allowed to check the details, and my Member of Parliament, Andrew Mackinlay, was refused access to these papers.

Among the points in the Mitrokhin account is a claim that I had been sent to Lisbon in 1979 on a KGB training mission. No such visit took place, but Ms Rimington was desperate to show a link to Portugal, as it allowed her to bring in a whole lot of other irrelevant but prejudicial material into my trial. Fortunately for Ms Rimington I had been on a camp-drive holiday with a friend in 1977, and we had spent 3 days staying in a campsite outside Oporto, in Northern Portugal. Ms Rimington seized on this as a way to incriminate me, and she gave evidence in court that this was the KGB training mission with which she wanted to connect me. The "evidence" was an old tourist map I had been given at the campsite marked with bus-stops and a restaurant that we had been told to use to visit the town, and where to join the excursion we had booked at the restaurant.

What impressed me about Ms Rimington was her ability to lie about these details as though they really were linked to the KGB.

While Stella Rimington visited the Arts Festival at Perth last month, a friend of mine approached her and asked her why she had lied at my trial. She became flustered and could not answer. Stella Rimington knows full well what she did. She lied under oath at the Old Bailey in order to gain my conviction, and the result was a 25-year sentence of imprisonment that has ruined my life.

I now challenge Stella Rimington to explain why she lied, and to give an account of her false testimony in court. I shall continue to expose her lies until she takes responsibility for what she did. For example, she does not acknowledge my case, or to even mention it in her autobiography, despite the fact that it has been in the public domain since 1992, and was one of her biggest achievements during her period as Director-General of MI5. This indicates to me that Stella Rimington is really ashamed of what she did to me, and would rather it be a period of her career which can be forgotten.

Ask Ms Rimington about my case and see what she says. I guess she will say it cannot be discussed, or some such excuse, when in reality she does not want to admit the wrong she did to me and the lies she had to tell to gain my conviction.

UPDATE: Voice of Russia are now covering this story. An interview with Tony Holland here.
Posted by mjs at 7:08 PM 3 comments: