The science of the expert witness

There are many court cases that rely on the evidence of an expert, whether they are forensic, medical, scientific, financial, or some other type of specialist. Inevitably this means both prosecution and defence will need to have their own set of experts, who are then encouraged to throw counter arguments at each other. The jury listen to both teams of experts, and then, with their layman viewpoint, they must decide who is telling the truth or making the best arguments. You do not have to look hard to see there are good possibilities in this situation for misleading a non-expert jury, and average juries do not include many experts - they may in fact consist of people such as housewives, shop assistants or bus drivers.

Having been extremely concerned at the poor quality of expert evidence used by the prosecution at my trial in 1993, I was very interested to read a letter that appeared in the New Scientist magazine, which confirmed my worst fears that confusion over expert evidence was not an uncommon problem. The letter can be read on the New Scientist website here, but for convenience I print it below:

I read with interest your editorial “Death of an expert witness” (8 November, p 3). As one of the defence’s expert witnesses (I am a neuropathologist) in the Louise Woodward trial, when the verdict “guilty of second degree murder” came in, I viewed the real verdict as “death”. Not the death of Woodward, who as it turned out, was saved by judge Zobel’s intercession, but a death of logic and science.

During the last phase of the trial, virtually every television reporter, and many of the “former” prosecutors who had been retained as commentators, usually prefaced their comments with statements to the effect that “they didn’t know science, and therefore could not interpret the evidence”. More shocking still, they would then go on to imply that this same level of ignorance extended to the jury and that because various experts had taken opposing positions, the scientific testimony should be disregarded as irrelevant and the outcome judged on the demeanour and testimony of the defendant. To my horror, when the verdict was reported, it appears that the jury had done exactly that.

The prosecution’s expert testimony was heavily laced with beliefs and dogma - for example, retinal haemorrhages mean shaking, infant head injuries rarely, if ever, have latencies, and so on. A jury properly briefed on the science would have recognised that.

Perhaps what is being said here is not so much that we should be excused for our lack of detailed scientific knowledge, but that we should also be excused for not knowing how to think critically and evaluate information that comes to us. If this is the case, and I suspect that it is, then we are all in very deep trouble. Our educational institutions must have, indeed, failed utterly.

I don’t think committees can replace individual experts’ opinion, but open forums for discussion can provide a context within which dissident opinion can be weighed, and “junk” science and dogma exposed. How the legal system can effectively utilise expert opinion is a thorny problem. It is high time that judicial conferences, lawyers’ organisations, advocacy groups, and other interested parties visit the broad issues raised with the Woodward case, and try to find a better way to elicit solid opinion and employ it in the delivery of justice. 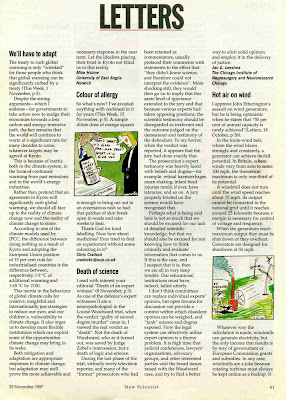 New Scientist article
I do not like censorship - Full Sutton prison prevented me from posting my reply to New Scientist - and I demanded the right to say what I wished to say. Eventually, the MoD agreed that my letter did not infringe the Official Secrets Act, and I was allowed to send it, although after more than 2 years my letter had no chance of being published as a reply to Mr Leestma’s letter. For the record I can now publish my letter below, and I hope you will see that it was relevant to Mr Leestma’s original points:

I agree with Jan E. Leestma's views on expert testimony (Letters, 29 November, p 61), but I blame the adversarial justice system for prostituting science - experts are used as weapons against each other, rather than to determine Truth.

I was convicted under Britain's Official Secrets Act, for allegedly leaking military secrets, after 20 prosecution experts said the exhibits were "sensitive". Nevertheless, my one defence expert proved the exhibits were either in the public domain or innocuous.

One "restricted" document, the only classified document in my case, became the key scientific issue. The document was a SAW filter specification - its actual use was not identified - but my expert recognised, from a sales catalogue, that it was a commercial product.

A prosecution witness, Dr Meirion Francis Lewis - the only witness to testify on the document - claimed he could identify its use on Britain's ALARM missile, and he said it would enable an enemy to jam the missile. As an electronics engineer myself, I believe Dr Lewis's deductions are impossible, and that his evidence was wrong.

Dr Lewis said he was told on the telephone that the document was used on ALARM, and he appealed to patriotism by saying fear of ALARM caused Iraq to switch off its radar systems during the Gulf War.

Although Dr Lewis admitted he was not an expert in missile technology, nor in jamming, the prosecution withheld his evidence for 14 months until my trial. No ALARM expert was used by the prosecution. The judge found these anomalies acceptable.

Due to the nature of my case, the defence could not find an expert to oppose Dr Lewis's evidence. However, the accuracy of his evidence remains obscure, as the Security Commission's report on my case (HMSO, Cm2930, July 1995) states: 'at the time the document was created it was not specifically linked to a particular weapons system' (Annex A.5).

If Justice is based on Truth, then scientists, and not lawyers, should determine the validity of scientific evidence. Juries should not be asked to decide which expert is honest; nor should a Counsel win cases by relying on the scientific ignorance of jurors.

I should add that, since giving his evidence at my trial, Meirion Francis Lewis has been awarded the CBE and is now referred to as a Professor.
Posted by mjs at 9:45 AM No comments:

Ignorance is strength - disinformation about WMD

The world is full of contradictions and it seems most of us will fall into the trap of believing what we are told. A 1984 Orwellian nightmare unfolds when we believe what we are told by our elected leaders, and they take their information from the unelected troglodytes who inhabit the caverns of Vauxhall. It is the role of the Ministry of Fear to create fear in the minds of the population, then we (the people) will agree to anything to take away that fear.

The art of disinformation has been around for a long time - think back to all those stories we heard about a threat from this, that, or the other organisation or despot. How many times do we hear about threats to Britain, our citizens, our way of life - stories often invented by the intelligence community - and these threats later magically melt away?

It is true the public persona and aims of MI6 and MI5 appear to be to protect the country, but these organisations seem to have developed a nasty habit for making up stories as well - if not actually inventing them, then at least embellishing them in the manner of Norse story-tellers and Chinese whisperers. It would appear that MI6 got it totally wrong about weapons of mass destruction, and, considering MI6 is not a blinkered organisation, nor WMD an insignificant thing to hide, this might at first seem puzzling.

Three decades ago Philip Agee published his book Inside the Company: CIA Diary, and it revealed the amount of disinformation and dirty tricks that Agee saw in his time as a CIA officer. We have also witnessed the way MI5 officers David Shayler and Annie Machon exposed the lies and illegal acts of MI5 and MI6 in the book Spies Lies and Whistleblowers - crimes rather than intelligent espionage. Then there were the revelations of Richard Tomlinson in his book The Big Breach: From Top Secret to Maximum Security, which confirms how secrecy and cover-up prevent the public learning what is going on behind the scenes in their name.

It is significant that both Richard Tomlinson and David Shayler were convicted of breaking the OSA (Official Secrets Act), and served time in prison for their "crimes" of telling the truth. The convictions are less to do with the damage these MI5 and MI6 officers caused, and more to do with frightening anyone else who is tempted to reveal what goes on behind those closed doors. This really is a Ministry of Fear.

In The Big Breach, Richard Tomlinson has mentioned my own case, and I quote what he published:

… MI6 only had the budget to accept high-level defectors such as OVATION and NORTHSTAR, and even they had to work for several years en poste before being allowed into Britain. Even the likes of Viktor Oshchenko, a KGB officer specialising in science and technology who offered his services in July 1992, did not have an easy time persuading MI6 that he was worth a resettlement package. His revelation that, while serving in London in the mid-'80s, he had recruited a GEC-Marconi sales engineer was regarded as only mildly important and I saw an MI5 report which concluded that the engineer, Michael John Smith, did not pass damaging secrets. (This did not stop MI5 having Smith arrested in an entrapment operation, and this paper was not made available to Smith's defence at his trial. He was sentenced to 25 years' imprisonment, the judge summing up with the outlandish claim that Smith had done incalculable damage to Britain's national security.)

All the books mentioned above are available from Amazon, and it would be worth reading them.
Posted by mjs at 5:17 AM No comments: