Were my meetings with Andrew Mackinlay MP bugged?

Only three months ago there was much debate and scandal over the bugging of Mr Sadiq Khan MP’s meetings with a constituent in prison. In 1999 and 2001 my Member of Parliament, Andrew Mackinlay, came to visit me in prison to discuss my case. I was already aware at the time of the danger that our conversations could be recorded and used against me. It is very easy to secretly record conversations in a private visit room, and there are cameras fitted in the ceiling to take photographs of any documents that are placed on the table between the visitor and the prisoner. I referred to my suspicions in an earlier post here.

Mr Mackinlay has just asked a parliamentary question to check whether the authorities will admit that our meetings were bugged:

219 Andrew Mackinlay (Thurrock): To ask the Secretary of State for Justice, whether the discussions held between the hon. Member for Thurrock and his constituent Michael John Smith at Full Sutton Prison, York on 1st September 1999 and 30th July 2001 were covertly (a) recorded, (b) transmitted and (c) monitored in some another way by or on behalf of any Government department or agency; and if he will make a statement.
(205648)

Mr Mackinlay is aware that bugging is a possibility, as he had a strange “burglary” shortly after our 1999 meeting, which he referred to in Hansard of 26 October 1999. I have referred to this matter over 2 years ago in another post.

PostScript: Almost as the above was being posted there is yet another scandal of prison meetings being bugged. This time it is the case of Harry Roberts and his lawyer Simon Creighton. Jack Straw does the usual acquiescent acceptance of this policy in a Daily Mail article.

Today I received a reply to my complaint to the Police, regarding the way they had dealt with the investigation of my case in 1992/93, prior to my trial. As was to be expected, the reply was obviously a standard type of response, simply trying to brush away my complaint as not worthy of investigation. Well, no wonder they do not want to investigate the details, because it is the Police who will be found to have done something dishonest. 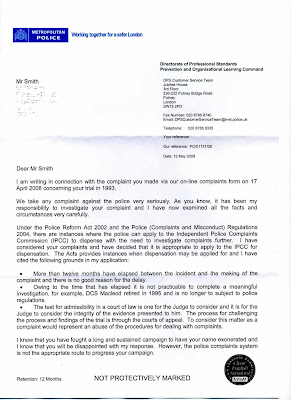 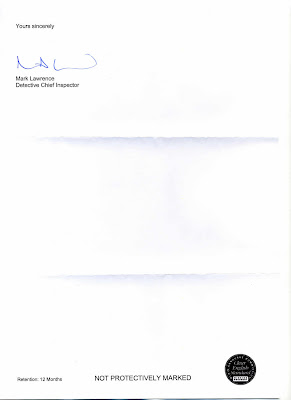 I am writing in connection with the complaint you made via our on-line complaints form on 17 April 2008 concerning your trial in 1993.

We take any complaint against the police very seriously. As you know, it has been my responsibility to investigate your complaint and I have now examined all the facts and circumstances very carefully.

Under the Police Reform Act 2002 and the Police (Complaints and Misconduct) Regulations 2004, there are instances where the police can apply to the Independent Police Complaints Commission (IPCC) to dispense with the need to investigate complaints further. I have considered your complaints and have decided that it is appropriate to apply to the IPCC for dispensation. The Acts provides instances when dispensation may be applied for and I have cited the following grounds in my application:

• More than twelve months have elapsed between the incident and the making of the complaint and there is no good reason for the delay.

• Owing to the time that has elapsed it is not practicable to complete a meaningful investigation, for example. DCS Macleod retired in 1995 and is no longer to subject to police regulations.

I know that you have fought a long and sustained campaign to have your name exonerated and I know that you will be disappointed with my response. However, the police complaints system is not the appropriate route to progress your campaign.

The reasons given for throwing my case out would be something to laugh about, if it did not have such serious implications for my future. For example, the point that the incident I complain about occurred more than 12 months ago, and that ‘there is no good reason for the delay’. I did not even know about the undisclosed evidence until 11 October 2007, when I received an e-mail revealing the truth behind the “restricted” document, which was the key exhibit at my trial. The reason this was not known to me before was because the Police had withheld what they knew about that document, and the fact that evidence was withheld become only too clear when the document was examined at my trial. So the Police are responsible for the delay, not me.

The second excuse for not dealing with my complaint is also a “red herring”, because I am not complaining simply about the wrong-doing of DCS Malcolm McLeod. The Police failings involved more than just one officer, and this will be obvious from the case papers prepared for my trial; it will be evident to anybody who takes the trouble to read those documents that there is something wrong with the Police investigation. The Police had to cover up what they knew in order for the ambush to be prepared during my trial. However, the evidence the Prosecution used to ambush my Defence was based on lies, and I did not discover the truth until 11 October 2007, due to the Police cover-up.

It is not acceptable to pass this matter off as something to be dealt with by a judge at an Appeal. I may never get as far as an Appeal if the Police, the CPS and the CCRC continue to block my grounds for an Appeal. The honourable route would be for the Police to admit the wrong that they did, and it would be better for a policeman to stand before a judge to explain what happened, rather than for me to justify why I was treated in such an abominable way.

The reasons given for rejecting my complaint are plainly false. The issues about which I complain about are written in black and white in the case papers. For example: McLeod’s allegations about Oshchenko were undermined by Stella Rimington’s testimony at my trial; the allegations about a KGB training mission to Oporto were challenged by the publication of the Mitrokhin Archive, and the claims that I had a secret document were disproved by evidence that it was an obsolete document in 1984. The Police do not want to admit that they falsified evidence to gain my conviction.

This matter has not ended by a long way, and I shall now be taking my complaint to the IPCC (Independent Police Complaints Commission) for a proper resolution. I cannot be certain that the IPCC is any more honest than the Police, but unfortunately I have to do the best I can when British Justice is so unreliable and corrupt.