MoD and Gordievsky distortion at my appeal

I cannot begin to explain what a complete shambles my Appeal became, when I went to the Court on Appeal in The Strand of London in May and June 1995. The previous year I had sacked my trial solicitors Tuckers and my QC Rock Tansey, and I engaged what I thought would be the dream team of Mr Michael Mansfield QC (Tooks Chambers) and the high profile solicitor Gareth Peirce, who works for the firm of Birnberg Peirce & Partners.

The Appeal did not go the way I expected, and this was in no small part due to the underhanded tactics of the Prosecution team. They brought in last minute evidence, which consequently I had no chance to fully evaluate or comment on, and my lawyers were unable to research the material to my satisfaction either. Inevitably, my defence team were at a disadvantage from the word go.

But what caused me most surprise and concern was that the Appeal continued with the same approach as had been used at the Crown Court during my trial. There was still the same underlying assumption that I had been recruited to the KGB by Viktor Oshchenko in the 1970s, and that I had been dealing with the KGB at the time I was arrested on 8 August 1992. This was a particularly damaging position in which I was being presented during my appeal, because it went against the testimony of Stella Rimington of MI5, when she told the jury during my trial that MI5 had no evidence I had ever met Viktor Oshchenko.

The position that should have been taken at my appeal was to attack the very basis of the case, about how such assertions of my dealings with Oshchenko could be put to the jury without any actual evidence. Unfortunately, my grounds for appeal were not as well prepared as I would have liked, and I was given no opportunity to discuss the issues - which I believe could have won the case - with my solicitor before the appeal.

It may help to get an idea of the issues that dominated the appeal to read the Guardian reports by Richard Norton-Taylor, who attended my Appeal hearings. 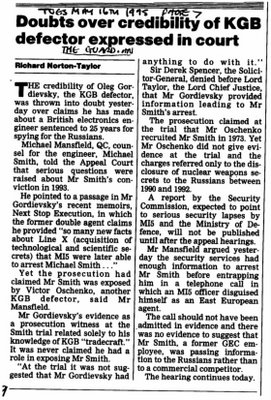 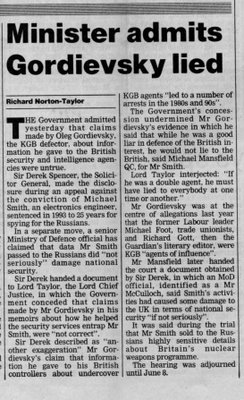 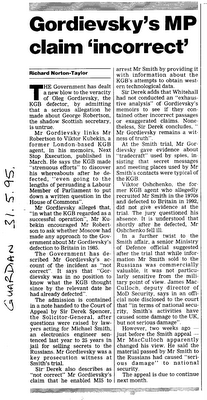 Guardian 31 May 1995
The three important documents disclosed to the defence on the first 2 days of the Appeal have recently been published on Cryptome website here.

The first document shows the MoD's damage assessment report from my case, which was produced on 7 March 1994, but it was not released to my defence lawyers until the first day of my appeal on 15 May 1995. This shows that the prosecution were withholding this evidence because it actually would have assisted the defence case. The conclusions from this report were that no serious damage was caused to the UK by my case.

The very next day, 16 May 1995 (the second day of my appeal), the prosecution released a second MoD report which reversed the conclusions of the first report. Now the MoD are claiming that "serious damage" was caused by my case. This reversal of the assessment conclusions was due to the Solicitor General realising that the MoD's first damage assessment report did not agree with the evidence given at my trial.

The other document given to the defence, on the first day of my appeal, was the admission that Oleg Gordievsky's claims in his book "Next Stop Execution" were not correct. He had claimed in his book that he had given information that led to my arrest, but this was not true. The other admission by the prosecution was that Gordievsky's claim that George Robertson (then Secretary of State for Defence) was a KGB agent - this was also not correct. The prosecution admit that there may be other "errors" (or lies) in Gordievsky's book, but they chose not to investigate them. However, the prosecution judge that Gordievsky remained "a witness of truth".

These documents reveal how underhanded the prosecution case against me became. The MoD's original investigation of the damage caused by my case was that it was "not serious", but the prosecution had to modify that honest opinion to bolster their position that there was sensitive material involved. On the issue of Gordievsky, he was a key prosecution witness, and so the prosecution had to conclude that he could not be undermined by the errors in his book.

It is my belief that these documents demonstrate a conspiracy was at work to cause my Appeal to fail.

The First MoD damage assessment report, produced for the Security Commission’s investigation of my case contains the following text.

Michael John Smith
1. Smith was employed as a Senior Quality Assurance (QA) engineer and manager at GEC Hirst Research Centre from December 1985 to July 1992. During that time he had access, in the normal course of his duties, to a wide range of research and development tasks; manufacturing, assembly and test processes; and electronic components, devices and equipment.

2. As a competent QA engineer, he would be checking that all manufacturing and assembly processes were carried out correctly in accordance with the various standards, rules and regulations that would apply. Much of this information is not classified, as Dr Cundy said in his statement. He would also get to know, and need to know, the timescales and priorities of the different projects for which he was carrying out his QA tasks. He would certainly be aware which projects he dealt with were for MoD or for other UK defence contractors - the QA requirements for each project differ and it is important to know which "customer" is which. This information is normally classified, for MoD contracts, at RESTRICTED. All the information that Smith saw would, however, be GEC COMMERCIAL IN CONFIDENCE, whether or not that privacy marking was printed on documents.

3. As far as I can see, Smith's work would give him knowledge on the fine detail of precisely how a given component, device or part was manufactured and assembled. He appears to have been particularly interested in the manufacturing processes (often chemical processes) for integrated circuits (both silicon and gallium arsenide) and for bulk crystalline devices, such as bulk acoustic wave (BAW) delay lines and filters, which are widely used in radar and communications equipment.

4. The material, both documents and devices/hardware, found in Smith's possession bear this out. The devices are samples of particular items on which GEC Hirst Research Centre were or had been working, and knowledge of how they were manufactured and assembled would be of considerable use to a country or company that found reliable and consistent manufacture of such devices difficult. The documents (notes, drawings, detailed explanation of process steps, etc) are all to do with the details of manufacturing processes for various devices and components; these would be useful to a country or company to enable them to make similar devices reliably and consistently. In reality, Smith was transferring technology and manufacturing know-how to his FSU contact.

5. The Rapier delay line is a case in point. The manufacturing know-how and processes for this and similar devices, widely used in radar and communications equipment, is well-established in the UK and has been so for about 20 years; the same applies to the USA and to some other countries, such as France and Japan. But the FSU may still have considerable difficulty in producing similar devices for use in their own radar and communications equipment which are as small, as rugged, and as reliable; and may not be able to do so consistently and in sufficient quantity to meet their needs. The detailed data given on the manufacture and assembly of the Rapier delay line would therefore be very useful to the FSU in saving them money, time and resources.

6. The GEC Hirst Research Centre is a major UK electronics research and development organisation: it is not a normal manufacturing plant and any production there would be for developmental samples and initial or small batch production. Smith was therefore able to see and gather knowledge of newer, more "leading edge" technology, processes and devices than he would have done if he had been a QA engineer at a normal electronics manufacturing plant. Clearly, this would be more valuable to his FSU contacts than more mundane manufacturing technology.

7. Overall, I assess that the information and knowledge Smith was able to pass on to his FSU contacts was of considerable commercial value to them, in improving their manufacturing technology in these areas and in saving them time and resources to catch up with the West. However, the technology was, in many cases, well-established in the UK and better or improved processes and devices were already available to the UK for defence equipment. I would therefore assess that, in terms of national security, Smith's activities have caused some damage to the UK, but not serious damage.


An amendment document was produced and given to my defence lawyers on the second day of my Appeal.

1. I am James Francis MacCulloch

2. I am the author of the security damage assessment dated 7 March 1994.

3. Since I completed that assessment, my attention has been drawn to the evidence given in the criminal trial by Dr M F Lewis, and I have had further discussions with Dr Lewis and Dr D Weatherley. In the light of this further consideration, the assessment dated 7 March 1994 is incomplete. I would therefore amend that statement as follows:-

a) Delete the last sentence of paragraph 7.

"8. The details of the information and knowledge in the possession of Smith was of direct military significance, because it would allow the operating characteristics and parameters of certain UK in-service weapon systems to be inferred by Russian radar and missile experts. In particular, this is true of both the Rapier Air Defence Missile System and the ALARM airborne anti-radiation missile (ARM).

9. The specification headed "Demonstrator Programme Requirement Specification Bandpass Filter Assembly" dated 8th January 1992 gives particular concern. If this specification was specifically identified as linked to ALARM, it would allow the identification of certain key operating parameters of that weapon system, which in turn would allow an intelligent enemy to develop effective countermeasures. The fact that Dr Lewis was able from his own knowledge to link this specification to ALARM indicates that the same linkage could be made by a hostile intelligence service.

10. For these reasons, my overall assessment now is that, in terms of national security, Smith's activities have caused some considerable damage to the UK's interests, but serious damage in the case of ALARM. Some of this damage is potential, in that countermeasures to these systems could be developed, but we have no way of knowing if the Russians have or not."


The Crown's Reply to the criticism of Oleg Gordievsky’s claims in his book "Next Stop Execution" caused them to produce a document to exonerate Gordievsky’s tarnished image in the eyes of the three Appeal Judges.


Court of Appeal (Criminal Division)
REGINA
- v -
MICHAEL JOHN SMITH
1. The Crown are satisfied that the reference to Smith on page 395 of the book "Next Stop Execution" is not correct. Gordievsky gave no information so that "MI5 were later able to arrest Michael Smith".

2. Gordievsky gave much information about Line X but none of that information enabled the Security Services to identify Michael Smith as a KGB agent.

3. We have not, and in the circumstances, do not intend to ask Gordievsky for an explanation of this passage.

4. We understand that this is not the only passage in the book in which Gordievsky exaggerates his role in such matters.For example, we are instructed in respect of the footnote on page 360:

(i) that his account of this incident is not correct; and

(ii) that Gordievsky was in no position to know what the KGB thought since by the relevant date he had already defected.

5. No exhaustive analysis has been undertaken to identify all such passages. Such an analysis would necessarily involve extensive research and would take some weeks.

6. We have made all necessary inquiries and, notwithstanding the above, in the Crown's judgement Gordievsky remains a witness of truth.